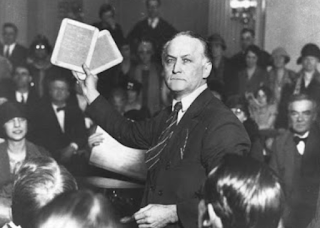 Seeing as we are on the eve of a big congressional election, I thought I'd share a podcast about the time Houdini testified before Congress on behalf of an Anti-Fortune Telling Bill. It was quite a wild affair, with Houdini bringing in some of his top notch investigators like Remegius Weiss and Rose Mackenburg. It's clear from the transcripts that some of the congressmen were not taking this seriously. Still others were dead serious about the testimony.

My guess is that Houdini must have had a hand in crafting the bill, which was another reason he was brought in. There are a number of surprises that come up over the several days of testimony. Much of this episode comes directly from the Congressional Record. And it also comes from several articles that appeared right here, in TheMagicDetective blog!

A side note, earlier this year (2018) I actually was involved in a video documentary about Houdini's time before Congress. The video was made for a French Language TV Show, so despite my excitement, it will all get dubbed over. I don't think it's aired yet, but when it does, I'll let you know. I'm curious how some of the magic turned out as the humidity that day was wreaking havoc on some of my sleights and flourishes, including a coin roll (the coin kept sticking to my fingers)

This episode runs almost 40 minutes and will be the last FULL Houdini Episode for a while. At least, that is the plan at the moment. Because it's my podcast, I could easily go back on that, lol. But I'm hoping to make the next podcast about Harry Kellar. For now, please enjoy Episode 7!