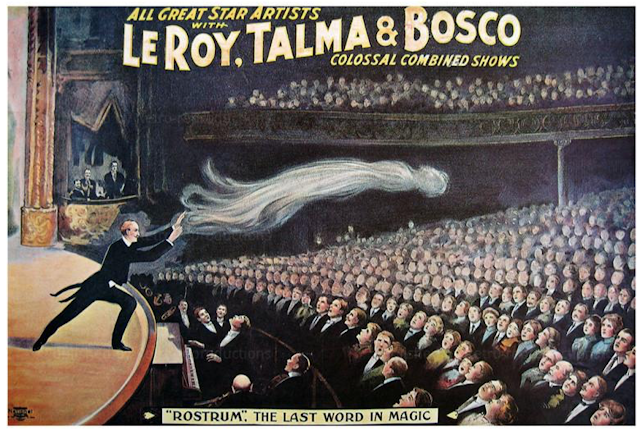 (This article is the first part of Episode 4 of the Magic Detective Podcast. It's the first time I've written an article for the podcast. There is MORE to Episode 4 than just this, so I encourage you to listen by going to http://magicdetectivepodcast.com/e/magic-detective-podcast-ep-4-servais-leroy/

Recently, I was staring at a poster a friend had put  up in his theater. It's the beautiful poster above, by Servais LeRoy featuring an effect called ROSTRUM-The Last Word in Magic. What an amazing image. But I was curious as to this 'Rostrum' illusion. I was not family with it. So I figured, I'd go right to the source, Servais LeRoy Monarch of Magic book by Mike Caveney & William Rauscher. A cursory look showed no sign of a Rostrum illusion, even though the poster itself was featured in the full color section of the book. 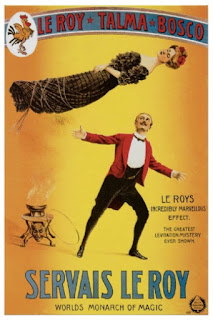 I looked up online to see if anyone had a clue as to what Rostrum was, some speculated it was the Asrah illusion, others were unsure exactly what illusion it might be.  The Asrah Illusion was a levitation that began with a woman laying down on a table; she would be covered with a cloth, and then float into the air. The magician would pass a hoop over her, and then she would raise higher above stage. At the height of the illusion, the magician would step towards the floating figure, grab the cloth and whisk it away, the girl having vanished instantly while floating.  I found A french website, that even used the term 'Rostrum' to describe the Asrah, but again, why?   Time to dig deeper...

In regards to Asrah, I was surprised to see that it began with a different name. Originally it was called, The Mystery of L'hasa. It appears to have been invented in 1902, though there are conflicting reports. LeRoy indicated that it may have been the 1890s. The poster to the right depicts a levitation, and the poster dates to 1905, but it is not the Asrah that is being used. Apparently, Le Roy was not confident in his illusion and scrapped it for a number of years before trying it again.

The Rostrum poster, at the top of the page, dates to 1920, and it was in 1920 that LeRoy was doing a show called The Unseen World. From the book Servais Le Roy Monarch of Magic by Mike Caveney and William Rauscher, comes this statement, "First the audience was apprised that it was impossible to guarantee a real ghost at every performance but they would do their very best. Then, claiming no spiritual abilities, they proceeded with a full blown seance." The they, in this instance, was Servais Le Roy and Julius Zancig.

There is a review of the show in the Sphinx Feb 1921 edition, where they mention an illusion called,
The Transmission of Souls. This sparked my interest as the poster could depict that very effect! So what on earth was this illusion. The Servais LeRoy book gives zero details. scouring through AskAlexander turned up little other than the fact that George LaFollette also presented the routine. I was not about to give up the search. Finally, I discovered a description of the routine from the May 1904 edition of Stanyon's Magic!

So, The Transmission of Souls, or as it was called in this article, 'The Transmorgrification Of Souls',  is an adaptation of The Three Graces, an early routine of LeRoys. For those interested, there is a version of the routine included in the Tarbell Course Volume 8, under the title The Mystery of The Three Ghosts. For the modern performer, you will recognize this by it's popular name, Things That Go Bump In The Night, though using different methodology. And also a different method from what Le Roy used in The Three Graces routine.

I did come across an intriguing image in my search to uncover the answer to this mystery, and it involves an illusion called A Strange Disappearance. This clearly has similarities to The Asrah. A person lays down on a lo table. They're covered with a cloth, and the magicians picks them up off the table while still wrapped in the cloth, and then whisks the cloth away as the person vanishes into thin air. Many thoughts came to mind here, and this led me on another tangent. In the book, Conjuror's Mechanical Secrets, S.H. Sharpe mentions that this trick was used by Devant and called Beau Brocade. That didn't sound exactly right to me, and I remembered an article by Jim Steinmeyer in MAGIC Magazine, December 2002,  about Devant and Beau Brocade. Sure enough, Mr. Steinmeyer discovered that this was a mistake on the part of Sharpe, and Devant's illusion was quite different. He pointed out that Le Roy's illusion came after Beau Brocade. Thankfully, Mr. Steinmeyer discovered this 16 years before I began my trek, so I didn't have to spend a lot of time trying to decide whether Sharpe was wrong or not.

Diving further into the review from the Sphinx Feb 1921, there is no mention of The Asrah being performed, though they do mention The Hindu Rope, The Bird Cage, and Transmission of Souls as being classic LeRoy illusions that were presented. And no mention of A Strange Disappearance either. 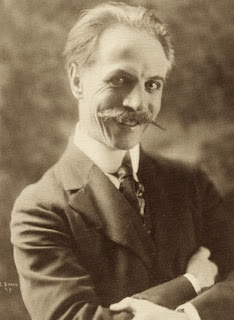 Going back to the Servais Le Roy Monarch of Magic book, on page 208, I find this line, "The Unseen World opened with Le Roy presenting a number of original effects with included his now familiar family of ducks." I think this line, and the one above about the ghost, may tip off what this Rostrum Illusion was, it may have been an original piece designed specifically for this show. Again, though it also could have been an adaptation of The Asrah or Le Roy's A Strange Disappearance. But I think it's supposed to be some sort of ghostly effect used during their Seance.

I was hoping to come up with a letter or something that mentions what Rostrum refers to, but I've not seen anything yet. I did, however,  see something that could potentially reveal ALL.  Lot 209 from the Summer 2018 Auction by Potter & Potter contained something called Servias Le Roy & Company Illusion Instruction Archive. It's possible ROSTRUM is mentioned in there. It's possible it's not, lol. I don't know who purchased it, but if you were the happy winner and are willing to let me know if ROSTRUM is listed and whether it's a unique illusion, an adaptation of Asrah, or IS the Asrah, that would be so much appreciated. Imagine, if Rostrum is actually just referring to a raised platform, a stage, and the words, "Rostrum- The Last Word In Magic" are actually just referring to theatrical stage magic, lol. We may never know. If I hear back from the owner of the Le Roy archive we might get a clue or even the answer, but it's a long shot. We are still left with a mystery, but one that I've enjoyed looking in to.

HOUDINI & LEROY
During the podcast I mentioned the book The Houdini Code by William Rauscher. I mentioned the short blurb in the book which describes LeRoy's thoughts on Houdini. I think they're accurate, after all, LeRoy did say them. But they're not complete. LeRoy said much more about Houdini. There was a time when LeRoy was even quite angry with Houdini over a court case, but in the end, that was all water under the bridge for friends. Listen to the podcast to see what else, LeRoy said about Houdini.
Posted by Carnegie