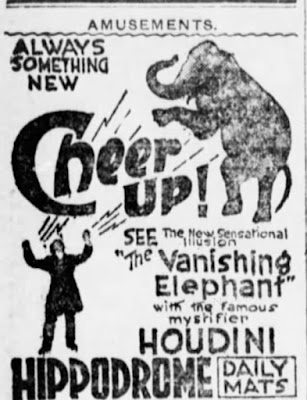 Today marks the anniversary of the first mega-illusion in the history of show business. This illusion being the Vanishing Elephant presented by Houdini. The illusion was presented at the Hippodrome Theatre in NYC Jan 7th, 1918. There are some interesting articles about the elephant illusion that appeared in the papers of the time.

The first is the Jan 6th, 1918 issue of the New York Tribune where it states that Houdini will place the elephant into a "giant cylinder shaped container of such dimensions that the largest elephant can enter with ease. It walks through this tube and vanishes." A Vanishing Elephant Tube? On top of this it says Houdini had been working on this illusion for 4 years since his visit to India. What?

Only two days later  a much better description of the effect appears in the Brooklyn Daily Eagle, Jan 8th, 1918. Here is what that paper printed, "Houdini has a score of stagehands drag out on the stage a big wooden cabinet, having a tube-like interior, seemingly about big enough to the 10,000 lbs elephant. Curtains at the front and doors at the rear are opened to give a clear view through the tube of the back drop, into this tube the elephant marches. the cabinet having been pulled around so that one side faces the audience. The curtains, thrown back, show the cabinet empty. The program says that the elephant vanished into thin air. That explanation is as good as any. The trick is performed 15 feet from the back drop and the cabinet is slightly elevated." So there we have a better description of what that 'tube' was, and a very thorough description of the effect.

As it turns out, despite the claim of 'working on this illusion for 4 years since being inspired by a trip to India', it looks like Houdini was not the originator of the idea. Guy Jarrett first pitched the idea and even created a small mock-up of the illusion for R.H. Burnside of the Hippodrome, which apparently fooled the director greatly. But they never came to terms. Then in comes Houdini who was able to pull it off and thus wins the distinction of being the first performer in history to make such a large object/animal vanish!

I've written about the Vanishing Elephant before, and would love to add a new twist to things, but I'm away from home and not near my library of books to scour through. So instead, I'll leave you with a cute little story that appeared in the Buffalo Enquirer on Jan 14th, 1918. It's from a column called 'Ye Towne Gossip'. and I'll reprint the entire thing below. Please note a small Houdini cartoon at the end of the article.

UPDATE: John Cox over at WildaboutHoudini.com has a wonderful article on the Vanishing Elephant which fills in many details. Please check it out.