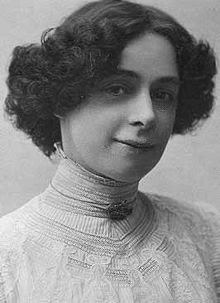 Bess Houdini was born January 22, 1876, which makes her 141 years old today. She honestly doesn't look it! In November, I attended the Yankee Gathering in Massachusetts and in attendance was John Hinson, Great Nephew of Bess and Harry Houdini. John is just the coolest guy. He clearly has a passion of magic history and especially the Houdini family. He loves to share the stories of his family and share rare photos, many that have NEVER been seen in print before.

John graciously has allowed me to share some of these pictures with you in the coming months, and I am very excited to be doing so. I don't yet have those pictures from John, but I know he's been busy so you'll get to see them soon enough.

For now we wish Bessie a very Happy Birthday!!!

HOLD THE PRESSES!!!! Bessie can have some cake today if she likes, but ole John Cox pointed out to me that John Hinson (the very same I mentioned above) showed him proof that Bessie was born on Jan 23rd!!!!!!!! Honestly though, having gone through many census records and birth records from the 1800s and seeing how dates change and fluctuate, its a wonder we have an accuracy at all. But, then again, if it comes from John Hinson's collection, I'm going to believe it! So 23 it is!!!!!!!!!