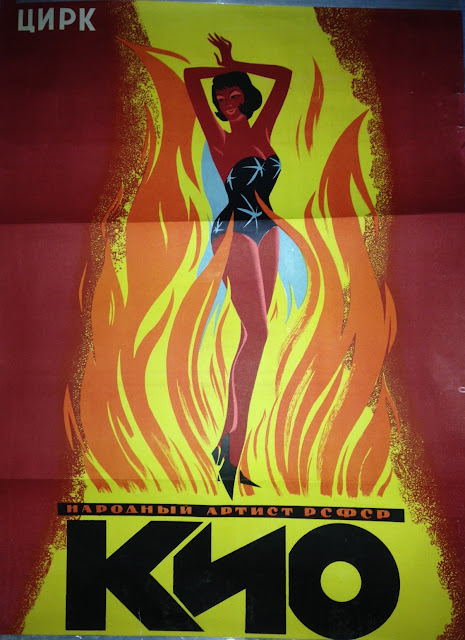 Years ago when I visited the American Museum of Magic for the first time, Bob Lund told me about this fellow named KIO who was the most famous magician in Russia. I'm not sure why that stuck with me, but it always did. Ten years ago, when I had my own little museum inside The Underground Magic Theatre, one of KIO's posters was featured on the walls. I actually have two KIO posters, one of them is above which wonderfully captures their Cremation illusion. The other is in storage but I found an image of the same poster online which can be seen here. The truth be known, I don't really know much about KIO. But I'll share what I've been able to dig up.

There were three KIOs. The father was Emil KIO and the star illusionist of the Moscow Circus. He was born Emil Teodorovich Girshfeld-Renard April 11th, 1894 in Russia. He died December 19th, 1965 in Kiev Ukraine. Upon his death, his youngest son, Igor Kio took over the show.  The eldest son, Emil Jr. was also an illusionist, worked with the Union of Circus Artists of Russia. Emil Jr. is still alive but retired.

Igor had quite the career after he took over for his father. He appeared in the U.S. at Madison Square Garden with the Moscow Circus back in 1967 and later toured the country. He performed on TV and had a number of his own Television specials in Russia. A rather unusual note to his career, was his marriage in 1962 to the daughter of Soviet leader, Leonid Brezhnev. Galina Brezhneva was 32 and Igor Kio was 18.  The marriage made Igor famous but the marriage only lasted 9 days. To make matters worse, Galina had been married to a circus acrobat at the time she met Igor and quickly divorced him to be with KIO. When word reached Leonid Brezhnev of his daughter's new marriage he sent to KGB after them. Apparently, the though the two were separated initially, they continued an on again off again affair for 3 years.


Like his father before him, Igor Kio was a circus illusionist which meant besides being part of the circus his shows were performed mostly surrounded. It has been said he performed "more shows per year than there were days." I saw estimates between 500 and 600 shows a year. He performed mainly with the circus, but also in theatres, sporting arenas and on television.  Igor KIO passed away August 30th, 2006 in Moscow. He has one of the coolest graves of any magician I've seen. Maybe only Houdini's grave is better. He is buried, along with his father and mother in Novodevichy Cemetery Moscow Federal City, Russia.

One of the featured illusions in the KIO show, presented by father and sons, was a spectacular Cremation illusion. An assistant would stand on a raised platform. A circular paper tube would cover her whole body and then it would be set on fire. The assistant would later appear elsewhere in the audience. Another popular illusion was the Lion's Bride, where an assistant, in this case, Igor's mother, would climb inside a large cage, which then was covered by a cloth, and a moment later, the cloth whisked away to reveal she had changed into a lion. There is a video of the father, Emil, performing the Lion's Bride, also some sort of Flyto Illusion, and several other effects, here.

Below is a video of of several of the KIO illusions, presented by both father and sons. There is also some footage of what I assume is the KIO warehouse where the illusions are stored.

Finally, I found this Russian documentary of KIO that is absolutely fascinating. I watched the entire thing and have no idea what was said (I don't speak Russian). But I did get to see a number of the illusions. There are interviews with Emil Jr and other family members and cast members. There is archival footage of Igor as well. The KIOs were clearly very famous and very loved by the public in their country and beyond.

The KIOS used many different posters to promote their performances. Back in April two KIO posters showed up in the Potter and Potter Auction. The description gives them as being for Igor Kio, but I'm certain they are his father's posters. There were a lot of KIO posters and it's hard to know whose was whose, except when they had an image of the particular person like the one on the below/right. There are some great posters for sure! I've been able to find at least 15 different posters online, and one which is similar to my poster at the top of the page except it is not framed in red.