The Reason For My Absence 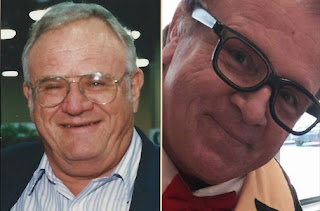 I must apologize for my short hiatus from this blog. The recent deaths of my Dad and my best friend have taken the wind from my sails. For those who don't know, my best friend, Bobby Dymond was a performer, magician, balloon artist and probably one of the greatest rock and roll drummers who ever lived. He had been battling cancer and came through all his procedures with flying colors. However, he developed pneumonia, and though it looked like he was on the mend, on May 2nd, while walking out the door of his house, he collapsed on the front steps. An ambulance was called but he eventually passed away right on the front steps. Cause of death was congestive heart failure linked to his pneumonia. His death was such a shock to everyone. He died May 2, 2016 at the age of 61.

Then, only days later, my Dad, who had been hospitalized for 40 consecutive days, died on May 15th, 2016. It is still very hard for me to speak of this, or write about it. He began with a heart valve replacement which went well, but then he had incredible side effects from the medication, so he ended up back in the hospital. Then he developed peritonitis, and then a few days later a strangulated hernia. If that was not enough, only days after these things he came down with c-diff.  After 40 days of hospitalization, the Doctors said there was nothing else they could do, he was not showing any signs of recovery. Each day he seemed to get worse. There was yet another ailment that developed on day 39. So, we decided to move him to a hospice. I went in the ambulance with him to the facility. He was awake and alert. When we got him into his new room, he was fine but eventually fell asleep. The nurses would come in every hour and check on him and though he was asleep he was fine. At 5:20am, the next morning they came in and he had passed. My mom stayed with him every single night he was in the hospital. I stayed with him most days, as both moral support and relief for my mom when she had to head home to take care of things.

So now you know where I've been. I'm sure that I will return to the blog eventually. Maybe even fairly soon. But for now, I'm still trying to work through everything. Thank you all for being loyal readers of my blog. I know when I return, I will have more great content and stories to share, until then, be safe and be well.
Posted by Carnegie