Who Was Alexander the Conjurer? 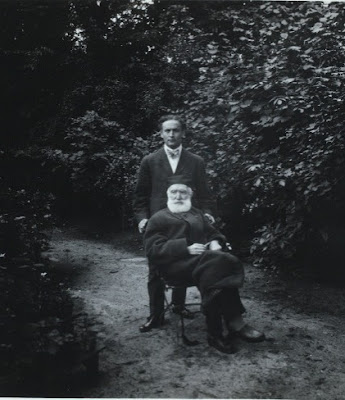 The photo above is of Houdini and Alexander the Conjurer. I've seen the photo before but it never occurred to me to ask, "Who was Alexander the Conjurer?". He was not Alexander The Man Who Knows. That Alexander was Claude Alexander Conlin who was a crystal gazer/mind reader during the Roaring 20s. This other Alexander, I am not familiar with, but some digging turned up some interesting details.

Alexander the Conjurer was born Dec 4, 1819* in Munster Germany. His real name was Johann Friedrich Heimberger. He was a contemporary of Robert Houdin and John Henry Anderson, the Great Wizard of the North. Houdini met Alexander on March 17th, 1903 while playing in Cologne. He records his entire visit and then some in his book The UnMasking of Robert Houdin. In fact, it appears that it may be because of Houdini that we still remember Alexander today. 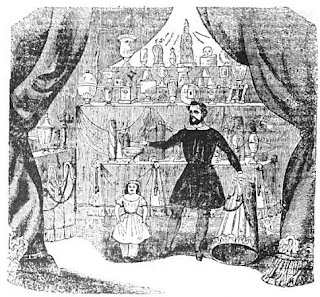 assistant to another itenerant German magician of the day F. Becker in 1839. And Becker had also started his career as an assistant to Bosco. Alexander only stayed long enough to learn all the magic and then was off on his own. Early on he presented magic combined with the exhibition of Phantasmagoria. It appears that he had a fairly short career but made quite a bit of money that allowed him to retire at and early age.

One of the reasons that Houdini records Herr Alexander is because of his claim to have invented the Suspension illusion in 1845 while on tour in America. This would be two years before Robert-Houdin if it's true. Apparently, however the only documentation is a flyer from Herr Alexander from 1850 showing the Suspension illusion. Houdini says that Alexander got the idea from reading about Indian Fakirs doing their sitting suspension which is probably the same place that Robert-Houdin got his inspiration. The The Annals of Conjuring says that Herr Alexander's version only had the person suspended upright and not at a horizontal position like Robert Houdin's version. Perhaps they both came up with a version of the same effect, but Robert-Houdin took the effect much further.

Houdini does make a small error in his chapter on Herr Alexander. He states, "I felt especially honored to stand in the presence of the only magician who, up til that date,  had ever appeared at the White House by the request of President Polk." I do know there have been others who performed at the White House, one was Wyman the Wizard who performed for Martin Van Buren, the 8th President of the United States, and thus predated the Alexander visit by several years. Still, you could count the number of magicians who performed for U.S. Presidents on one hand, so he was still in rare company.

Houdini's visit with Alexander is fascinating to read. Here was an 80+ year old gentlemen who, by 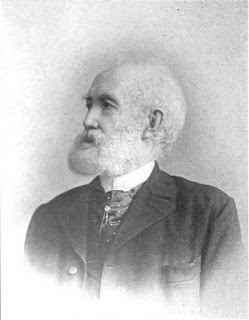 looking at the photo above and from Houdini's description, was 'bent with years'. But he came alive when talking about the history of magic. Herr Alexander knew many of the greats from his day including: Bosco, Robert-Houdin, Frikell, John Henry Anderson, Signor Blitz, Compars Herrmann, and according to Houdini, the original Bamberg of Amsterdam.

In 1904, Houdini paid a second visit to Herr Alexander and again he was greeted warmly. This time, the old magician gifted Houdini with some playbills and programs from his own collection. But this would be the final time the two would meet. At the conclusion of their meeting, Herr Alexander confided to Houdini that all preparations were made and he soon expected the Grim Reaper to come to take him. But death is often cruel and in this case, death came to take his wife rather than him. Alexander would live several more years and live to be 89. He died July 25th, 1909.

He was known professionally as Herr Alexander or as Alexander the Conjurer. In late 1843 he came to the United States to perform. The beginning of his tour left him almost penniless. Eventually, his lucked changed and the money and success began to roll in.

Some of the tricks for which he made quite a sensation included The Spirit Bell, the production of a very large bowl of water while in Chinese robes, and of course the Suspension illusion. Houdini mentions in The UnMasking of Robert Houdin, that Herr Alexander's performance of the large bowl of water production predates that of Ching Ling Foo.

He continued to perform in the US until 1847 when he left for South America. Magicpedia states that Herr Alexander's daughter assisted him with his Second Sight routine and she died while on tour. This event is what caused him to return to his homeland of Germany. Houdini says that Herr Alexander returned to Germany in 1854, but The Annals of Conjuring puts the date at 1852. Whichever one, we know that he did not return to performing when he got home. He amassed quite a fortune in his few years performing and retired upon returning home.

He did write a book describing his early career called, Der Moderne Zauberer (The Modern Magician) which he claimed, according to Houdini, "is rated as one of the gems of German literature, as well as the best book ever written by a conjurer." However, in Annals of Conjuring it says "Der Moderne Zauberer, a book of no great interest save for its reference to the itinerant conjurers of Germany."

*In the book MAGIC-A Pictorial History of Conjurers in the Theater author David Price lists the year of Herr Alexander's birth as 1809. He also lists the 1852 or 1854 as the year he returned to Germany, so he too discovered the discrepancy.
Posted by Carnegie