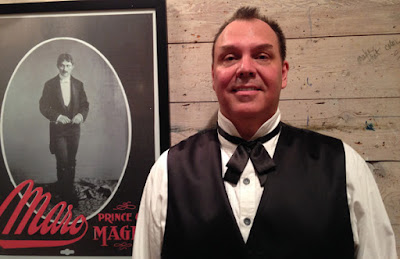 I finally returned from my trip to Michigan to perform and lecture. The performances were at the W.T. Best Theatre, also known as The Old Art Building in Leland Michigan. The lecture I presented was on the Life and Magic of Walter Truman Best, better known as MARO Prince of Magic.

Why, you might ask did I present a lecture on some obscure magician? Well, it turns out, Maro lived in the town of Leland in the early 1900s. His home still stands there to this day. In fact, his home is for sale for a whopping $4.5. million dollars! The Historical Society and the Leelanau Community Cultural Center were aware of Maro's connection to the area and I was contacted to come and lecture and share some magic. 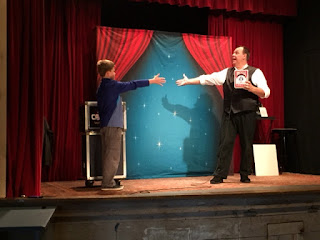 The shows were great fun. The stage is not very large, nor is the theatre, but given that the building is close to 100 years old, it had a very unique feeling to it. Like stepping back in time to be truthful. I presented mostly modern routines during my two afternoon shows. Interestingly, even though I was 800 miles from home, I met two people from my area who were in attendance at the earlier shows. Small world!
I also have an odd feeling that the place may just be haunted. Why do I say that? Well, my second show had two mishaps. One during a routine that NEVER EVER EVER has given me trouble. Somehow a string from who knows where got twisted into a prop and made it impossible to function. Later in the show something else went south on me. Again, stuff that never ever happens and it happened twice in the same show.  It made me somewhat apprehensive about the evening lecture.

The evening lecture is something I had been working on for months. It began with tons of research into this fellow Maro, who I had only known of because of his posters. I dug up a lot of information from quite a few sources. After compiling all the historical facts, I had to put it together so that a lay audience could understand and appreciate it. Let's face it, magicians who are into magic history would eat this stuff up. But lay people, that's another story.

I decided to include a number of Maro's routines in the lecture. First up was Maro's Slate Trick which I found in an old issue of The Sphinx. I combined it with the Spirit Dial, an effect popular among Victorian Era Magicians. I actually combined the Maro Slates with the Spirit Dial into an effect that was quite entertaining and mysterious.

The big effect I had planned for the lecture did not come to be. I had wanted to present The Flags of All Nations, a staple of Maro's show. However, the Flags I obtained began to disintegrate as I worked with them. Perhaps sometime down the road I can get them remade/restored but it didn't happen this time around. Instead the big feature was my Hand Shadow Act. It lasted just over a minute long, probably much shorter than Maro's actual routine. I think my version gave the 21st Century audience who was watching enough entertainment and got the point across as to the various things that can be done with hand shadows without going too long with it. Maro's ghost did not show up during the lecture at all.  I had the distinct feeling that he was sitting in the back watching and smiling. The audience of non-magicians thouroughly enjoyed the lecture, magic and power point presentation. Many came up to me after and shared their connection to Maro, Maro's home, or some of the magicians who performed in Leland after Maro died in 1908.


I will be doing a more complete write-up of my trip and of Maro for a magic magazine. Once that article is finished, I'll let you know where to check it out. Oh, and I took some video footage that I will edit soon for an upcoming episode of The Magic Detective Youtube Show. Yes, it's coming back!