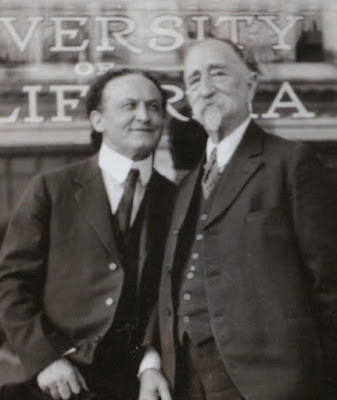 I've been doing some research on Horatio Cooke recently. He has quite the life story which I covered briefly in an earlier blog article. I was rereading the magazine article that Mark Cannon wrote for the MUM back in April 2006. The article was incredible and it ended with Mark discussing the difficulty he had trying to locate the grave of Harry Cooke. He eventually discovered it with the help of magic historian, Diego Domingo. There is a great photo in the magazine of Mark kneeling in front of the grave.

I realized that I never included Harry Cooke in my The DeadConjurers blog. So I went online and found another photo in Find-A-Grave.com. The photo owner Don Lynch kindly gave me permission to use the photo that he took of the grave. Thanks Don!

But I also found something else of interest. I found the photo of a grave belonging to 'The Infants of HG Cooke and LM Cooke' in Illinois. I'm 99% sure this grave belongs to two children of Harry and Louisa. They lived in Illinois before moving out west to California. It's likely these two children died in childbirth.

Harry Cooke and his wife are buried in Rosedale Cemetery in Los Angeles, the same cemetery where Harry Kellar is buried. Incidentally, they were good friends.