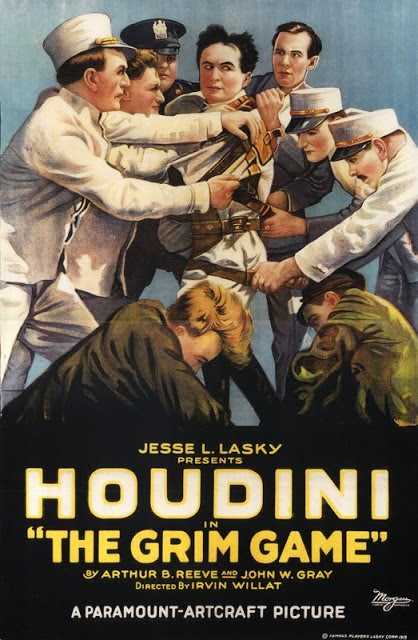 I believe it is tonight, March 27th, when a whole new generation of people will get to see, for the first time, the cinematic magic of HOUDINI. Not, Tony Curtis, Paul Michael Glaser, Harvey Keitel or some other actor portraying Houdini, but instead, the real honest to goodness Harry Houdini. Tonight, at the TCM Film Festival, audiences will get to see The Grim Game for the first time in many many years. As far as the motion picture industry was concerned, this movie was lost. Only a small 5 minute segment of film seemed to remain from the original print. The magic world, at least some of us in the magic world knew otherwise. We knew a print existed though it's condition was anyone's guess.

Thankfully, through the tireless work of Dorothy Dietrich and Dick Brooks from the Houdini Museum in Scranton, Rick Schmidlin a Film Preservationist, along with Turner Classic Movies the movie was purchased from it's previous own, Houdini collector Larry Weeks and tonight the movie will make it's 21st Century debut.

I have a wish, and I doubt it would come true, but I would love to see this movie get released to movie theatres all over the country and then perhaps find it's way to get nominated by the Academy Awards Committee for some honor. If nothing else, perhaps it's time to recognize HOUDINI for his contribution to Movie Making.

Oh, by the way, I was slightly incorrect when I said that HOUDINI aka Tony Curtis wasn't going to be there. Actually, according to the list of movies at the Festival, the 1953 Paramount movie HOUDINI, starring Tony Curtis and Janet Leigh, will be showing at the Turner Classic Movie Film Festival. I know we will get a full report from our friend John Cox about these movies. And I'm sure we will hear from Dick and Dorothy as well as they will be at the festival as well. Exciting times to be a Houdini fan!


UPDATE: Ok, I got the date wrong! It's tomorrow night. That doesn't make me any less excited about this. I'm going to throw things over to John Cox who is THERE and has been following this much better than I have. John runs WildAboutHoudini and if you don't know that you are either new to all this stuff or living under a rock. Here is his latest post about the movie, http://www.wildabouthoudini.com/2015/03/tomorrow-grim-game-will-be-free.html