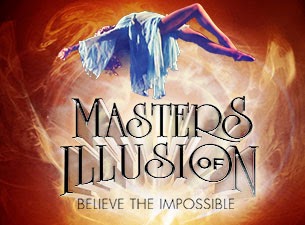 Suddenly magic is everywhere, again. Tonight on the CW TV network, Masters of Illusion airs an all new episode. The only stinker is it airs at 9:30pm. That's an odd time, but I'll be up so I'll be watching! And speaking of Masters of Illusion, Gay Blackstone and her live version of the show is at it again with the LIVE version of the show. In fact, she is pulling double duty, or the show is at least. They have shows at Harrah's Rincon in Valley Center California on Jan 2, 9, 16. And all the way across the country on the east coast in Atlantic City, also at Harrah's they play 8, 15, 22, 29th.

I hear that Michael Finney, Jonathan Pendragon and Michael Turco are among the performers in Atlantic City. I don't know who the cast is on the West Coast.

IF you are near these locations, please take the time to go see the shows. The Masters of Illusion Show is an excellent production that showcases the best acts in magic. They will be touring all year long so watch for them to come to a city near you!

Speaking of Magic on TV, Wizard Wars starts up again on the SyFy Network in a couple weeks. AND Penn Jillette of Penn and Teller fame, has his own show on the Travel Channel called Penn Jillette's Street Cred, which features Street Performers from across the country and each week an act has a chance to win $10,000. It's different but I saw one of the episodes and enjoyed it. You'll have to check the listings on the Travel Channel to see when it airs.

Speaking of the Travel Channel, one of their regular shows, Mysteries At the Museum, often features magic. I've seen a number of stories on items stored in Ken Klosterman's collection, The Salon deMagie. They've covered, Houdini, The Great Lafayette, and recently I saw a story of John Mullholland. Even when they don't feature magic history stories, it's still a cool show.

Email ThisBlogThis!Share to TwitterShare to FacebookShare to Pinterest
Labels: Masters of Illusion