What Came Before The Rabbit and Hat?


When lay people think of magicians, one of the first things that comes to mind is the Rabbit and Hat trick. Thanks to John Henry Anderson, the Great Wizard of the North, this effect has become the most iconic image of the magician. It dates to the Victorian era by the way. But there is another creature that has been the magical sidekick to many magicians, probably even before the Rabbit. That creature is the Goldfish.

I am not really certain who produced the first goldfish via magic, but I do know that it was in the act of Robert Houdin in the 1850s. If Houdin had it, then so did John Henry Anderson who got a great deal of his act from duplicating Robert-Houdin's act. Robert Houdin produced a bowl of goldfish. Magicians since that time have created many wonderful illusions with these little guys.

In Vienna Austria, probably slightly before Robert Houdin was Johann Hofzinser who presented a
very interesting effect called The Fountain of Love.  It begins with a glass goblet containing some sort of murky dark water apparently from the 'Fountain of Love'. A borrowed ring is tossed into the water to test whether the volunteer who lent the ring has true love, for if he/she does, the water will turn crystal clear. The performer covers the glass goblet with a scarf for a moment and then when it is removed the water can be seen to be clear and there are a a couple goldfish swimming inside the goblet. But the even more amazing part, one of the fish apparently has the ring in it's mouth! A net is used to retrieve the fish and the ring.

Hofzinser continued to develop the trick and eventually developed a slightly different routine he called 'The Ink of the Enamored'. The effect was similar, but the method had been changed.  A very primitive version of the trick is sold as 'Ink to Goldfish' today.

Chung Ling Soo presented an effect called Aerial Fishing where he would take a fishing pole and cast it out over the heads of the audience and a fish would appear on the end of the line. The fish would be reeled in and removed from the line and dropped into a fish bowl. Then the effect was repeated several times. Today, Mac King presents a slightly streamlined and very funny version of this effect.

Jack Gwynne, the illusionist, was known to magically produce a stack of goldfish bowls. This was one of his signature tricks. In fact, this particular trick is so associated with Jack Gwynne, that the Stack of Goldfish Bowl Illusion is actually etched into his tombstone! Jack Gwynne also had a Goldfish bowl illusion where he would produce a woman from a large goldfish bowl. 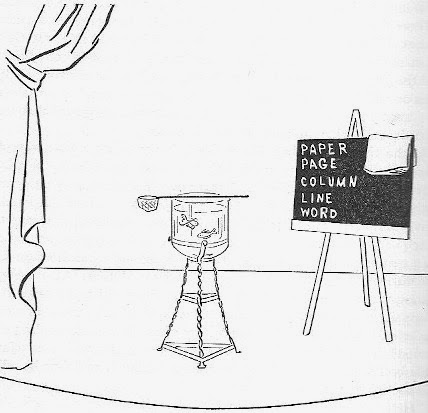 Devant. In this particular trick, the Magician has a large bowl of water and fish. On the bottom of the bowl are cards with letters on them. Words are chosen by audience members and written down on a blackboard. The fish them proceed to spell the words! They apparently hit the cards as they swim around and then the proper letters gradually float up to the surface! I told, crazy, but oh so cool.

As mind boggling as the effect seems, the method to produce the illusion is even crazier. Unfortunately, I don't give away magic secrets on this blog, but you may want to check out OUR MAGIC by Maskelyne and Devant  just to discover how the illusion works. To top things off, I had heard someone recreated this trick for one of the magic conferences a few years ago! Wow.

Today, Teller from Penn & Teller, presents a version of Miser's Dream in which coins are produced from a large tank of water. At the end of the routine 100 goldfish are magically produced as well. Interestingly, on page 283 of OUR MAGIC a very similar effect is described in the same article about the Educated Fish. Given that Teller is well known for his knowledge of Magic History, I guess it's possible that this was the source of his inspiration. The routine described in the book is a Misers Dream where the magician produced handfulls of coins and they are dropped into a large glass bowl on stage. It doesn't say if the bowl contained water, nor does it mention anything about a goldfish ending. Those additions are Tellers.

I too have ridden the Magic Goldfish Train. In fact, some of my friends jokingly call me the Goldfish Magician because of the countless number of ways I've developed to magically produce fish. I even do a goldfish routine in my School Assembly Show, but it uses fish images rather than actual goldfish.

David Copperfield has a really interesting goldfish routine where water mysteriously vanishes and the reappears in a glass and then with his barehands he produces a quantity of fish.

My favorite Goldfish trick by someone other than myself is by Luis DeMatos. The first time I saw his routine I was blown away. I had been working on a similar thing myself but ran into a problem. When I saw his routine he had something unique, a cloth with a large hole in it. This allowed him to reach into the tank while it was covered.  About ten years ago, I emailed Luis and asked for permission to use this same cloth with a hole and he kindly gave me permission. I honestly don't know if he uses that anymore. I know though I used it for a time, I eventually moved onto other ways of producing fish.  But still today, I think Luis's routine is fantastic. The amount of fish that appear is astonishing. It's a beautiful effect and I'm glad he still performs it

I'm currently working on a NEW Goldfish effect for my Steampunk Illusionist Show. I'll post a link to it once it's completed.