The 30 Days of Houdini 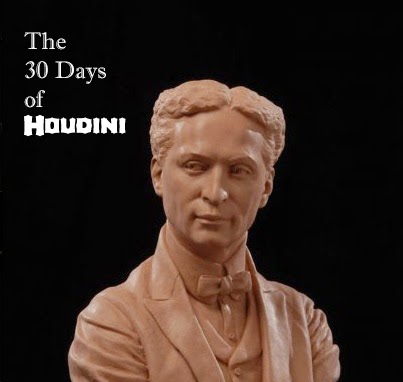 I've started a little thing I call 'The 30 Days of Houdini'. Thirty days of Houdini articles as a sort of a countdown to the big movie event on the History Channel. I guess I started with what my friend Mark calls, 'a soft roll out'. The first few articles appeared with no fan fair at all.....very un-Houdini-like of me.

To be honest, I'm not sure I can even pull off 30 articles in a month. I also have 40 performances to do, and more work on my Steampunk Illusionist show and the iWonder Show. So, time will tell if it can be done. I know that the articles will likely be short. The first ones, about the Origins of Houdini's act, are broken into Parts 1, 2, 3 and probably 4. A lot of cool things are planned. On Day 23 which is August 23rd, the Potter & Potter Houdini Auction takes place. I have no affiliation with them, but I will surely help promote it! If there is anyone out there who would like to contribute an article or two, that would assist me in getting to 30. I've had a few guest bloggers in the past, so let me know. You can reach me at carnegiemagic@aol.com

I'm working on something special for Day 30, which I can't quite divulge yet. I hope you enjoy
The 30 Days of Houdini!

UPDATE: As of today, August 10th, I've continued to put out a new piece each day. I have material written for about a week in advance, so I'm covered until next Sunday. I'll begin researching things for the last two weeks of August shortly. I've got a good feeling I'll make all 30 articles!