A New Twist on the End of HOUDINI by Tony Curtis 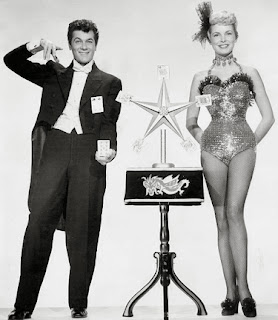 In the world of Houdini, one of the most beloved movies is the Paramount 1953 version with Tony Curtis and Janet Leigh. It also happens to be one of the most frustrating because of the ending. Magicians know that Houdini died from Peritonitis after having been punched in the stomach by J. Gordon Whitehead.

The HOUDINI movie with Tony Curtis shows a different end to Houdini's life. In the movie, he dies attempting the Pagoda Torture Cell Escape. So iconic was this ending that for many years lay people thought that was the way Houdini actually died.

That brings me to this little story. A close friend related the story of meeting Tony Curtis during one of his Art Gallery showings a few years before he died. They struck up a conversation and as is probably the case, the talk turned to his movies. My friend brought up the ending of the Houdini movie and why they chose to go with a fictitious ending.

Before I tell you what he said, I have heard many reasons. One, is that the students involved in the incident (when he was punched) were still alive and the studio feared being sued.  Another was that the studio wanted a more dramatic ending to the movie.

What I never heard is what Tony Curtis told my friend. He said "We shot the ending with the punch and it didn't play very strong for test audiences. So we shot the alternate ending where I die in the attempt of escaping from the big tank of water." I have never heard that before. I totally believe that he said it, but I'm not sure if I believe that it's true. IF it is true, that means that the movie many of us came to love had the potential to be a very different movie. In fact, still shots from other scenes have surfaced over the years, like the Milk Can, and the Airpline Transfer from the Grim Game.

Again, I must say I do believe Tony Curtis said it, but I'm not sure I believe it. I'm wondering if anyone else has heard this story?
Posted by Carnegie