Over in Norfolk (UK) The Davenport's Magic Kingdom has recently opened. This is a museum dedicated to five generations of magic collecting and magic memorabilia. It's a special magic museum open to everyone. With the price of a ticket you get to see the wonderful exhibition and a 30 minute magic show.  There are posters, costumes and props on display AND you'll also find the Water Torture Cell used by actor Guy Pierce in the movie Death Defying Acts. The film came out in 2007 and also stars Catherine Zeta Jones in a highly fictionalized story about Harry Houdini and a psychic medium.

I received a photo of the cell from one of my readers, Philip David Treece. He also mentions that it's a very large cell probably much larger than any cell previous made. Below is the photo of the cell. Enjoy the photo and if you are in the UK by all means, go check out Davenport's Magic Kingdom. 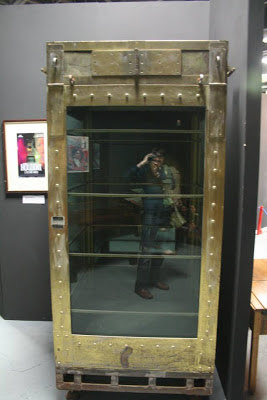