Originally this blog article was specifically for those attending the Washington D.C. Symposium on Magic History. I wanted to share with you some interesting sites to see while you are in town that are all magic related. But now the S.A.M. Convention is here, so for all those attending please enjoy this guide as well!

1. The location of the old Al's Magic Shop. If you knew Al Cohen, or had ever been to the shop, you know what a great guy Al was as a demonstrator. His shop was a hang out for many over the years. The final location of the shop was at 1012 Vermont Avenue NW. The original shop location was torn down in the late 1970s.

2. Robert Heller spots. Robert Heller was a resident of Washington D.C. for several years. Neither of his homes are still there, but I will give you the locations. The first place he lived in Washington is 260 F. Street NW. which is today a parking lot that is at the corner of 3rd and F st. St. (see link)
The next place that William Henry Palmer/Robert Heller lived in D.C. was 447 13th Street NW. Today the Warner Theatre sits at this location. He also played piano at the Church of the Epiphany at 1317 G St NW, Washington, DC.

3.  HOUDINI in D.C.. Harry Houdini was all over the D.C. First spot would be Old Ebbitt's Grill, 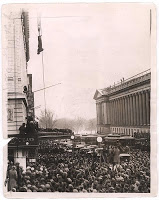 which is located across the street from the Treasury Building at 675 15th St NW. This is the location of Keith's Vaudeville Theatre and also the spot where in January 12th of 1922 Houdini hung upside down and escaped from a Straight Jacket.  If you walk up the street to the brown building you can get almost the identical view as seen in the photo to the left. Slightly down the street from Keith's Vaudeville Theatre location is the 'W' Hotel, which used to be the Hotel Washington and Bess and Harry stayed here several times on their visits to D.C. That hotel was also featured in the Godfather Movie.
Houdini's first hanging straight jacket escape in D.C. was from the Munsey Building which today is the J W Marriott Hotel at 1331 Pennsylvania Ave NW. Houdini also performed at the Chase Theatre while in town but it's long gone. The Old DC Jail where Houdini escaped from the cell of the assasin of President Garfield was located at 625 Park Road NW in D.C.(it is no longer there, a church stands in the lot where the jail used to be). See also, Capital Building and White House.
This link also describes the Challenges Houdini presented while in D.C. http://www.themagicdetective.com/2011/01/houdini-dc-challenges.html

4. Harry Kellar in D.C. Kellar performed a number of places in D.C. including the National Theatre (see address below) The Columbia Theatre 1112 F St NW but is gone now and Ford's Theatre on 511 10th St NW.

5. The National Theatre 1321 Pennsylvania Ave NW. This is a historic theatre which still happens to be open and operational. Magicians who had performed there include: Robert Heller, Alexander Herrmann, Harry Kellar, Harry Blackstone Sr. and Penn and Teller.

6. National Theatre/Helen Hayes Theatre this is a smaller theatre within the National Theatre. During the Civil War days it was a pool hall frequented by none other than John Wilkes Booth. Today it's a small theatre where performances are given on select Mondays and Saturdays throughout the year. Countless D.C. area magicians have performed in this room, including ME!

7. MAX MALINI in D.C. Malini performed in several places in D.C. including The Willard Hotel
1401 Pennsylvania Avenue NW (Houdini and Bess were also known to stay at this hotel). The Roosevelt Hotel 2101 16th St NW Washington is another spot where Max Malini set up shop, but today they are apartments. See also Capital Building and White House.

9. Alexander Herrmann in D.C.. Herrmann the Great appeared at the National Theatre (see address above) and also performed along with Compars Herrmann at the White House in the East Room to entertain none other than Abraham Lincoln.

10. Wyman The Wizard in D.C. John Wyman Jr. performed at Odd Fellows Hall fairly regularly when he was in Washington at 419 7th St N.W. He also performed for President Lincoln at the White House in the East Room. Wyman lived on 6th St in D.C. but I don't have an exact address and I'm sure the building is gone.

11. Signor Blitz in D.C. There is a story of Blitz running into Abraham Lincoln at the Summer White House (known today as Lincoln's Cottage) 140 Rock Creek Church Rd NW where Blitz did some magic and the President and magician had an interesting exchange.

12. The Capital Building & White House. There is more 'magic' going on in these places than any magician could ever do! But I'll give you a brief run down of some historical moments. Max Malini bit the button off Senator Hanna's coat on the steps of the Capital Building. Malini also gave an impromptu performance in the Marble Room of the Capital. Houdini gave his testimony before Congress at the Capital Building during the debate over Fortune Telling in the district.

14. Fords Theatre in D.C.. Of course, this is the historic theatre at 511 10th St NW where President Lincoln was shot. But it was also a spot where Harry Kellar performed and then years later, Lance Burton, The Pendragons and others have performed there for the Gala for The President. This building once had a sister location in Baltimore where Harry Kellar passed his mantle to Howard Thurston. That Ford's Theatre is no longer there.

15. Next is the Library of Congress which has quite a lot of magic posters and ephemera in it's collection. The Houdini collection is housed in the Jefferson Building and I think you need an appointment.