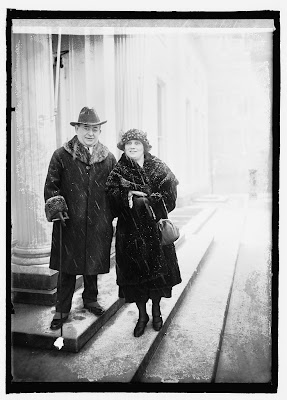 Max Malini was an amazing individual. He didn't perform grand illusions, or spectacular escapes. He was not a great manipulator, nor was he a mind reader or comedy performer. His props were items you could find anywhere. His cups and balls trick was done with drinking glasses wrapped in newspaper and a cut up piece of wine cork used in place of the balls. Everything seemed so ordinary. Yet in it's simplicity, Malini used these things to become a world traveling magician who performed for Royalty and Heads of State.

Malini first appears in Washington D.C. in January of 1902. Upon the steps of the US Capital building, Malini encountered Senator Hanna. The brazen magician reached forward and bit off a button from Hanna's jacket. Before the stunned Senator could react, Malini apologized and magically restored the button back to the jacket. This stunt so impressed the Senator, that he invited Malini to perform at his home for some invited guests.

According to a March 3, 1902 article in the Washington Times Newspaper, Malini next showed up in the Marble Room of the Capital Building. The Senators were so excited to see Malini they encouraged him to put on a show. The Marble Room became Malini's  own impromptu theater. One congressman threw an orange to Malini requesting he do something with it. Malini instantly changed the orange into a lemon. Next, a card was selected by another congressman and Max instructed the gentlemen to tear up the card keeping one piece for himself. The other pieces vanished and Max Malini told the congressmen to go into the next room, find a particular book and turn to a certain page. The congressman did exactly this and found his restored card in the page, minus the one piece.

Malini finished his performance with his signature Card Stabbing routine where four cards were chosen and lost in the deck. Malini would be blindfolded and then using a pen knife, would stab at the backs of the cards and locate the selected playing cards. This impromptu show garnered Malini several newspaper articles. One was a full page spread that would make even Houdini jealous.

Washington D.C. seemed to be an ideal place for Malini to work as he came here often. In 1922, he performed at a public reception at the White House. This time he bit off a button from the coat of none other than President Warren Harding. According to the Malini biography by Dai Vernon, following this performance Malini received a front page article in one of the Washington D.C. papers.

I did find other places besides the Capital building and the White House where Malini performed. The Roosevelt Hotel 2101 16th St NW Washington. The hotel has since been converted into apartments, but below is a photo of the location today. When Malini performed there he used one of the banquet rooms to put on his show and would sell tickets. He apparently also performed at many of the clubs and guilds in the area as well. No doubt he used these to gain access to high society individuals and quickly established a name for himself. Another location was the Willard Hotel 1401 Pennsylvania Avenue Northwest  Washington, DC..

UPDATE: I forgot to mention that one of the newspaper articles discusses an unusual trick where Malini had a card selected and lost in a deck of cards. When he tried to find it he was unable. So he told the congressman to check his pockets but there was no card. Then he suggested he check inside the lining of the jacket, and lo and behold, there was the card, inside the lining of the jacket! I wanted to point this out because this very effect was mentioned in the Malini Book, but not as the finished effect, instead HOW he got the card there. Fascinating character.