More on George-Supreme Master of Magic 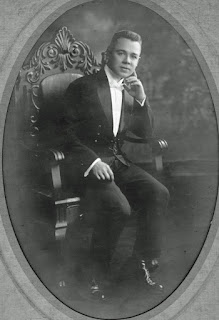 Last Summer, I wrote an article about Grover George, the magician who basically got run out of town by Howard Thurston. I recently was contacted by a relative of Grover George and she was kind enough to forward the above photo and some additional details on the life of her Great Uncle.

I've learned that Grover's father A.A. George represented him during the lawsuit with Thurston. Also that a nephew went on tour with Grover and during the tour got either poked or bit by the company Lion, Ruthie. The young nephew had the scar on his finger to prove it. The lion later escaped while the company was in Chicago and apparently was shot by police.

There may be more stories coming! It's always such a pleasure to get in touch with relatives of these magicians that so many of us still admire. Because of this blog I've heard from family members related to Robert Heller, Harry & Bess Houdini, Nate Leipzig, Grover George, Harry Cooke and others. It is always an honor to speak with these folks and I'm sure I will yet meet many more as time goes on! 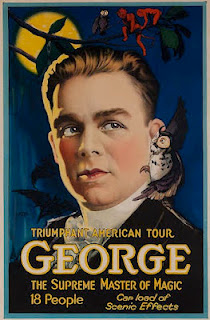 The original article on Grover George can be found here: http://www.themagicdetective.com/2012/07/george-supreme-master-of-magic.html
Posted by Carnegie