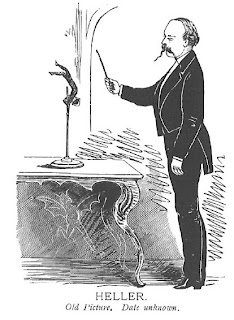 Readers to this blog will be aware of my interest in Robert Heller. I would go so far to say that I am the biggest Robert Heller fan of the 21st Century! I have done quite a bit of research on Heller to date and recently came across a full description of a routine in his show. I'll give you a bit of back story first.

The Flying Cage was the invention of DeKolta and found it's way into the main stream of the magic world through an unscrupulous cousin of DeKoltas. Harry Kellar purchased a cage from this cousin and brought it to America. He sold the secret of the cage in exchange for props to rebuild his show and this then is how the Flying Cage found it's way to America. In Europe, the magic dealer Charles DeVere was building cages as well and probably got the secret from the same source as Keller.

Robert Heller purchased his cage from Charles DeVere only a short time after Harry Keller had brought the trick to America. The Flying Cage, or what we know today as The Vanishing Birdcage, was a controversial trick because magicians were using live canaries and apparently killing them accidently and quite frequently. Kellar was even arrested at one time for the crime of cruelty to animals. But he was able to prove that his birds survived and thrived.

Robert Heller did not go this same route and in fact had a very clever routine. He began by producing feathered bouquets out of a foulard. These bouquets were also darts which he would then toss down and stick into the stage floor. A canary was produced from among the feathers of one of the darts and an assistant held onto it while Heller went to retrieve the cage.

As Heller walked on stage with the cage the assistant who had been holding the bird in their cupped hands, opened their hand to show the bird was gone! Heller then said "Well if there is no bird, we won't need the cage" and in that instant made the metal cage vanish at his finger tips.

A very different presentation than what most of the other magicians had been using, and a great way to avoid the controversy over killing a bird. By the way, the illustration at the top is of Heller, but he is NOT presenting the Flying Cage in this routine, but rather some sort of automaton which I hope to have more news on at another date.
Posted by Carnegie