I was just online watching the auction from Australia for Houdini and various other magicians memorabilia. I was planning on bidding on an item listed as 'magicians clothes'. I knew they were not 'magicians clothes'. What they had there was Max Malini's clothes AND something else. But before I tell you what that something else was, let me tell you about the item before this which was a cigar holder that belonged to Malini with sold for something like $8000. CRAZY!

By the way, the lot was recently corrected to say "Max Malini's Magician's Outfit" Ok, now to the 'something else'. Amongst the items was a little cloth bag and two wooden eggs. Max Malini's egg bag was IN THAT LOT and not even LISTED!!!!!!!!!!!!!!!! A piece of cloth from Signor Blitz's egg bag sold for $2000. This lot, with Malini's pants, gloves, walking cane, shoes and his egg bag and eggs, sold for $5000. Three thousand dollars less than the cigar holder and a way bigger bargain. http://www.lawsons.com.au/asp/fullcatalogue.asp?salelot=7919A+++1863+&refno=31006282&image=0

The auction estimate was $300-$600. I was willing to bid in that range, but the auction opened at $3000. So I was out pretty quick, lol. Some of the books have been selling quite low, can't imagine what will happen with the Houdini items, the auction estimates on those are pretty low, but I imagine they'll go through the roof. 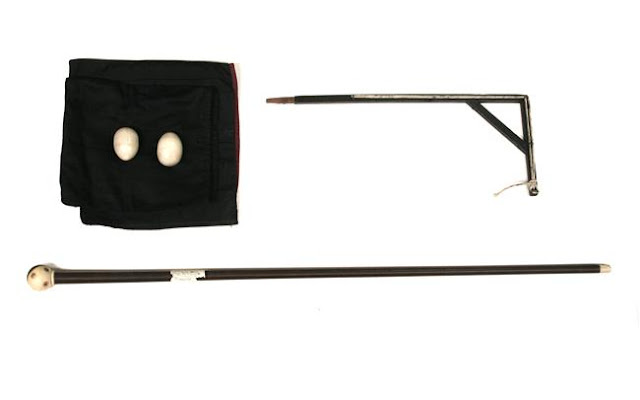