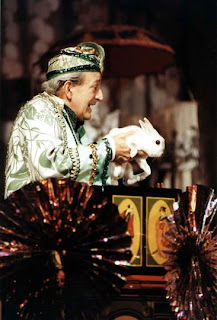 I don't think I ever shared this story with anyone before. This is about my original visit to Beverly, years ago as a teenager.  I had seen an ad in GENII Magazine for this show called LeGrand David. I didn't know much about it other than they had a two page ad with tons of reviews by famous people. It just so happened my family and I were going to New England on a short vacation and would be staying in Nashua NH. I knew that Nashua was not far from Boston so I asked my Dad and he took us all, along with the friends we were visiting to the show.

As a teen-aged magician, I was more concerned about being sure none of the tricks fooled me. But somewhere along the way I got caught up in the show. Somewhere along the way I gave in to the sights before me and just took it all in. That singular event had a huge impact on my life. In fact, during intermission, I got met someone in the audience who was famous. I met Mr. Bill Larsen, of Magic Castle and Genii Magazine fame. He and his wife were in the audience that night and it was so exciting meeting him. After the show, I met David Bull, the man who is Le Grand David. But I wanted to meet Cesareo and was unable. He was swamped with people. I did buy two magic posters, both of which I still own and both of which I proudly displayed in the Underground Magic Theatre years later. But there was something about this guy Cesareo, who I only knew then as Marco the Magi. I didn't know he had another name.

I still can recall moments from that show in my mind. I remember seeing Cesareo bounce around the stage with so much energy and enthusiasm.  I remember his Linking Ring Routine and I remember a very different version of The Floating Table. I also remember young Seth the Sensational, who was the son of Leslie Bartlett. What a grand show it was. I remember Marco telling the story of one of the stage curtains and telling about FuManchu. I recall David performing an unbelievable two handed Billiard Ball Manipulation routine that stunned me. I also enjoyed seeing David present the Rice Bowls and the Vanish of a Walking Cane.

It left such an impression on me that years later I wanted to return. I sent a letter to the company and not even sure if I addressed it to anyone in particular. I wanted to bring my magic club up there on a field trip. A week later I received a personal invitation from Cesareo to be his guest for a weekend of my choice. He sensed something about me in the letter which he mentioned, and which I'm not even sure I was aware.

I made arrangements and along with my girlfriend at the time took the train to Boston. As we rode the train, I carried with me an issue of MAGIC Magazine that had been devoted to LGD. I wanted to show it to my girlfriend to let her know a little about what we were going to see. But a day before we left, I was sitting in my office with my friend Ralph and I said to him, "don't ask me why, but I have a feeling that I'm not going to return the same person I am now". Maybe that was the sixth sense talking, I don't know. But suffice to say, that weekend in April in 2000 changed my life because I did finally meet the real Magi, Cesareo and he had a profound effect on me that he probably never quite realized. It never would have happened though without that seed being planted years before. The desire to return always stayed with me and when I returned it was like going home, to my magic home.


Tomorrow, in the morning, I'll be leaving for Beverly, MA. I am anxious to see my friends and to say goodbye to Cesareo in person. I'll have more articles pertaining to LGD soon, and once things get settled, Episode 1 of The Magic Detective, which has been long delayed because of my workload and other issues, will be appearing.
Posted by Carnegie