David Copperfield is the best known illusionist in the world. He was recently crowned King of Magic, and it's hard to dispute that title. He has been doing an illusion in his show that I think is called '13'. I believe it was created by Alain Choquette and it begins by selecting 13 people at random from the audience. They are brought up on stage where they all sit on chairs that are on a raised platform. A small curtain goes around the raised platform and suddenly they are gone!

I've seen it. It's great, like most of the things David Copperfield does. However, I was totally taken back when I read an article from a newspaper dated Feb 3, 1918. The headline read:


CIVIL ENGINEERS VANISH
UNDER HOUDINI "SPELL"
At first I thought it was just an article using Houdini's name, but not about him. However, I read the article and what a surprise it was. It turns out that the American Society of Civil Engineers was in NY for a convention. While there, three hundred members of the Society went to see Houdini at the NY Hippodrome in the 'CHEER-UP!' Show. He was creating quite the sensation by making an elephant vanish on stage nightly.

The engineers had made arrangements for the dozen newly elected officers to go up and examine the box. Houdini then asked them while they were up there if they would step inside, along with the elephant. Lo and Behold, Houdini, that master of mystery, caused all 12 officers AND the elephant to disappear! Eighty years later, David Copperfield would be closing his show with the same effect....minus the elephant of course. David's illusion is cool, but Houdini did it first!

Now this blog was called Houdini Outdoes David Copperfield. But I thought it only fair to allow David to return the favor. You see, David now has one of the largest, if not the largest collection of rare historical magic props. Among his collection are Houdini's Subtrunk, WaterTorture Cell, Milk Can Escape and more. So Houdini would feel right at home at Copperfield's very unique Museum/Warehouse. 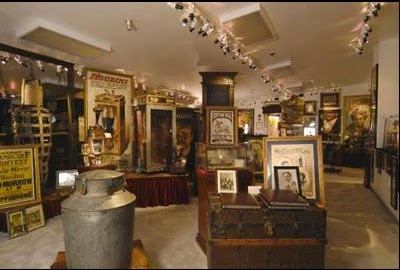