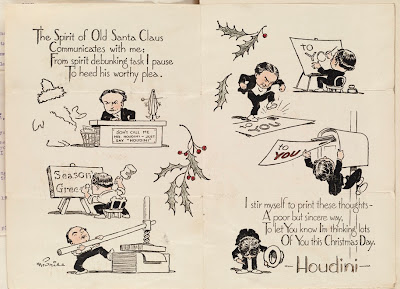 Here is a wonderful image, courtesy of the Boston Public Library. It is from the Houdini scrapbook compiled by Quincy Kilby. The scrapbook covered the years from 1904-1926. I've seen this image before in books, but didn't realize there was a slight colorization to it, though that might have been added by Kilby.

Houdini was Jewish, but he obviously celebrated Christmas or at least had no problem sharing the greetings. He had a number of images like this over the years. I'm not sure if they were actual cards or postcards. The one above has a crease down the center, which makes me think it may have indeed been a card. Kevin Connelly has a another image by the same artist on his blog, check it out. 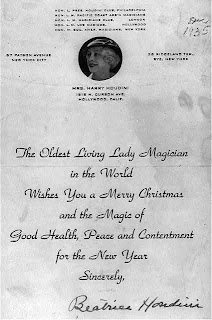 It appears that Bess Houdini kept up the tradition after Harry had died. The above is an image from 1935 and came out of the Library of Congress Collection. The image has a crease in it, so I'm wondering if it was actually a card and we are seeing the inside of the card. If that is the case, then I've got no idea what the outside of the card looked like. However, it could just be a nice holiday greetings on Bess's stationary which is more likely the case.

One thing I found interesting on it were the three addresses for Bess. The Payson Avenue NY address is where the Rev. A. Ford Seance was held. I'm not familiar with the address on the far right and the lower one is obviously her California address.

I can't help but wonder if there are more unseen, Houdini Christmas cards out there? At the rate things have been showing up this year, I'm sure a new one will turn up soon.
Posted by Carnegie