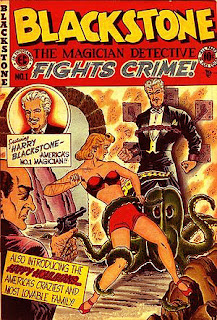 Before I became the Magic Detective (a name given to me by Mark Daniel), there were a number of others. One of the first was Harry Blackstone Sr.. His Magic Detective began as Radio Serial which ran from 1948 to 1950. These were 15 minute adventures in which actor Edward Jerome played the part of Blackstone the Magician and shared exciting stories from his life. These were written by the man who was also responsible for another popular radio serial called The Shadow. The author was none other than Walter Gibson.

Gibson was also a confident of Thurston and Houdini as well as many other magicians. His Blackstone radio series was complimented by a Blackstone the Magic Detective Comic Book series as well.

Here is an episode the Blackstone The Magic Detective for you to listen to. If you are interested in listening to more of the series please visit the website
http://www.radiolovers.com/pages/blackstonethemagicdetective.htm
And if you like you can purchase all 55 known audio recordings of Blackstone The Magic Detective from The Miracle Factory http://miraclefactory.net/zenstore/index.php?main_page=product_info&cPath=3&products_id=85 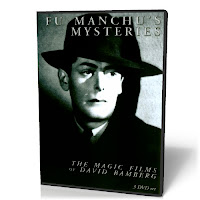 David made a series of three Spanish language films in which he solved crimes using magic. The films were The Ghost of the Bride (El Espectro de la Novia), The Headless Woman (La Mujer sin Cabeza), The Black Ace (El As Negro) and all were made in the 1940s in Mexico. These are available through The Miracle Factory at http://miraclefactory.net/zenstore/index.php?main_page=product_info&cPath=4_19&products_id=14 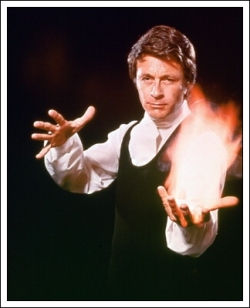 The next two magic detectives were Bill Bixby and Hal Linden and they both who had their own TV series. Bixby's was called "The Magician" and ran for one season on NBC back in 1973. I'm pretty sure that Mark Wilson was the consultant on this one as Bill Bixby dresses in the same costumes that Mark wore. I vaguely recall this show from childhood, but fortunately the SciFi/Syfy Channel ran the series a few years ago.

Bixby played a character named Anthony Blake and drove a White Corvette equipped with a PHONE! (this was long before cell phones). As I recall there were a number of scenes shot in the famous Hollywood Magic Castle.

Bill Bixby continued to be a big supporter of magic even following the cancellation of this show. He was a member of the Magic Castle and appeared on a number of magic related TV specials. 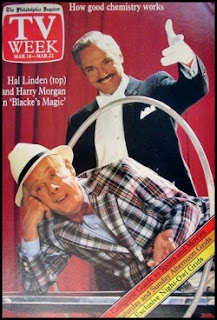 Hal Linden played a magic detective along with Harry Morgan in Blacke's Magic. This ran for thirteen episodes on NBC in 1986.

Hal Linden has the classic look of the magician, like a Mandrake or a Cardini. Unfortunately, I can't help but wonder if the consistent use of this kind of dated imagary is what killed the show. Magic appears 'out of date' and frankly, sometimes magic is out of date or out of touch.

I'll bet money that the consultant on this show was Harry Blackstone Jr.. The show's logo looked just like that used by Blackstone Jr. the Magician. I remember seeing Hal Linden on TV promoting the show and doing some magic and he was pretty good. Here is a clip from opening of Blacke's Magic... 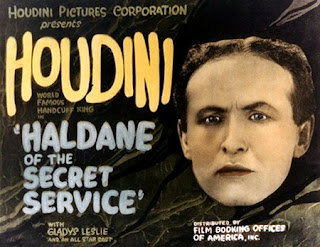 But as far as I can tell, the very first magic detective was none other than Harry Houdini. In his 1923 film Haldane of The Secret Service, Harry goes after the bad guys and in the process gets tied up, chained up and bound in every way imaginable.

Houdini is the star, the director and the producer of this movie. It's interesting that he used his old moniker of "World Famous Handcuff King" in the promotion of the movie. I think it's pretty clear who the star of the movie is by looking at the image to the left.
Haldane of the Secret Service is available on the Houdini DVD compilation by Kino, along with The Master Mystery, The Man From Beyond, Terror Island, and clips from The Grim Game along with some archival footage.
http://www.kino.com/video/item.php?film_id=896