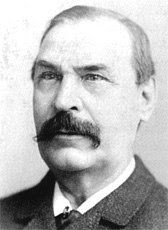 Ever wonder how some of the greats in magic got their start? We know Houdini was inspired by both Dr. Lynn and the book The Memoirs of Robert-Houdin. And Robert Houdin had seen street conjurers in his youth which began his fascination with magic. What about Harry Kellar? Well, it seems young Harry Kellar could have gone a number of directions. As a  boy he was apprenticed to a druggist, but that didn't work out and Harry went to NY. In New York, he met a Reverend who wanted to adopt Harry and put him to school to become a minister. This seems like the course his life would take until one day the Reverend took Harry to see a magician named The Fakir of Ava. Well, after that singular performance Harry decided he too wanted to become a magician. A short while later he moved not far from where the Fakir lived and one day answered an ad in the newspaper for an assistant for  the Fakir of Ava. The Fakir told young Harry that many boys had been by to apply for the job but none was selected. He said he let his dog do the choosing. Well it turns out the dog took an immediate liking to Harry and he got the job!


The Fakir of Ava was really Isaiah Harris Hughes and was born in Essex England on December 25, 1810. He moved to America and took the name of a previous employer and became The Fakir of Ava. Hughes traveled across the US during the Civil War and did quite well. He developed a type of show called 'The Gift Show' where he would give out basically inexpensive door prizes to audience members. This scheme really helped his business and he was able to retire with a good deal of money.
During his time as a traveling magician he performed many standard tricks of the time. A playbill from his show lists the following tricks as part of his evening of entertainment:
As an avid fan of magic history I can decipher some of the routines from the show. The Aeriel Bank would have been a production of money from the air, like a Misers Dream or perhaps a version of Houdin's Crystal Casket. The Mephistopholes Hat OR The Wonderful Hat was probably some sort of Hat production, where items would appear from a hat. The Witches Pole is interesting as this effect is done today, but not with blood, instead a word appears on the arm from burnt ashes. Vanishing Cage is likely the vanishing birdcage created by DeKolta and copied and performed by most magicians of the time. I can't help but think the Great African Box and Sack Feat is probably some version of the Maskelyne Trunk trick.
Harry Kellar stayed with the Fakir of Ava and worked has his assistant for a number of years. When The Fakir felt that Harry was ready to go out on his own as a magician, he gave his blessing and off Harry went.

The website for the cemetery is http://www.forest-lawn.com
By the way, the first time I saw a picture of this grave was a photo that Houdini took of it (at least I'm pretty sure of that). I can't for the life of me track down where that photo is located. I checked a bunch of the biographies and other magic history books but I can't seem to locate it anywhere. Any suggestions?
Posted by Carnegie