It's David Devant Day over here at the Magic Detective Blog. Actually, My painting blog has an image of Devant and my new Dead Conjurers site has a picture of Devant's grave. Follow the links on the different pages to find out more about Devant. The photo above is of Devant's residence in London. The blue circular commemorative plaque denotes exactly where Devant lived. 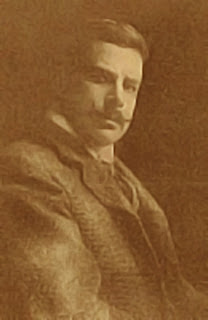 David Devant was born David Wighton in London on Feb 22, 1868. He is considered England's Greatest Magician. He also was involved in the early days of cinema both filming his magic and running his films all across England. As great as he was and as well known, it did not stop him from getting kicked out of the Magic Circle, an organization which he helped create. He was expelled for revealing magic secrets. Devant's defense was that he only exposed his own effects and did not think he did anything wrong. I'm sure that the Magic Circle made up for this decision in later years as they now have a Devant Room at the Magic Circle Headquarters.

Devant was not just a performer but an inventor. Among his creations were: The Magic Tea Kettle, The Golliwog Ball, The Artists Dream, BIFF-The Vanishing Motorcycle, The Chocolate Soldier and the Mascot Moth. Many of Devant's effects would end up in the repertoires of other performers including Harry Kellar, Howard Thurston, Doug Henning, The Pendragons, Lance Burton, Steve Cohen and more.

During the height of his career David Devant started having health problems. He was forced into retirement in the 1920s due to some form of paralysis. He was committed to a home to care for him. He died October 13, 1941.
Posted by Carnegie

Email ThisBlogThis!Share to TwitterShare to FacebookShare to Pinterest
Labels: Devant