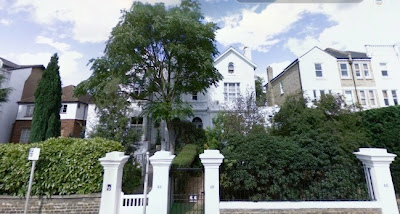 According to the The Glorious Deception, by Jim Steinmeyer, he gives an address for the house that William Ellsworth Robinson owned when he lived in London. In the back yard is his workshop. I have no photo of the workshop, but I do have a picture of the house and WOW what a house it is! I'm really glad it's this house too because most of the houses on this street are obstructed from view by the many trees and shrubs. Not to say that this house has a clear view but you can make it out, many of the other homes can't be seen at all due to the trees. The book says that he lived in a 3 story mansion and indeed that is exactly what we have here, at the exact address from the book. 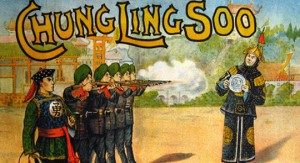 As you may know, William Ellsworth Robinson was the real name for the Chinese Conjurer Chung Ling Soo. He was American, not Chinese. On March 23rd, 1918 while performing the dangerous Bullet Catching Feat on the stage at the Wood Green Empire Theatre in London, Soo was shot to death. There was a great deal of controversy following the death, some people thought it was murder, others thought it might be a clever method of suicide. But in the end, a faulty gimmicked rifle seemed to reveal the truth, it was an accident. Houdini at one time wanted to perform the Bullet Catching Feat and was persuaded not to by the beloved Dean of Magicians Harry Kellar. Houdini listened to Kellar and decided not to attempt the stunt. The Bullet Catch has a history of killing it's performers. Some 12 people have died presenting this stunt and so far only Penn & Teller have presented it on a continuous basis without being harmed. 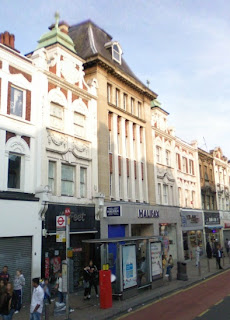 Here is a photo of the Wood Green Empire Theatre in London. Sadly, the only thing that remains of the theatre is the facade. The theatre itself was turned into a Television studio in the 1950s and then in the 60s it was demolished to make way for a parking garage and stores. There must be a law in England that says if you have an old theatre it must be torn down to make way for a freaking parking garage! That's frustrating to hear and to continually find out. The building that says 'Halifax' on it is the site of the Wood Green Empire.

I will say that for a magician any books on Chung Ling Soo are required reading. He worked for both Alexander Herrmann and Harry Kellar. He was such an iconic performer that he is the only REAL magician mentioned in the movie 'The Prestige' with Christian Bale and Hugh Jackman. His posters today are some of the most highly prized. I'll be focusing on one of his illusion creations in a later blog to show you his creativity. 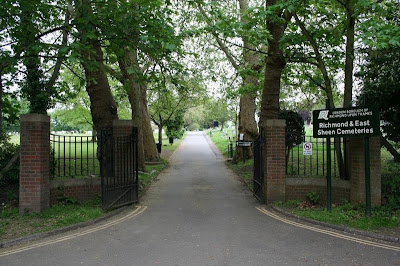 Soo/Robinson is buried in East Sheen Cemetery, Section B, grave number 219/220/221 London. Here is a photo of the cemetery entrance. Here is a picture of the grave from Genii Magazine courtesy of MagicPedia.net 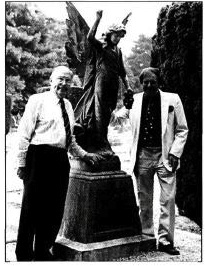 IF you have a color photo of the grave, would you please send it to me so that I can post it on the blog. Thanks! carnegiemagic@me.com
Posted by Carnegie