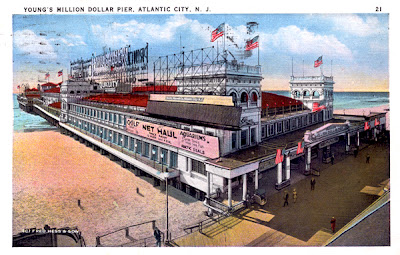 On June 17, 1908 Harry did a handcuffed jump off the Young's Million Dollar Pier in Atlantic City. According to the Kalush Biography, Houdini hit his head on the ocean floor and came up bloodied but free of the cuffs.

I've been to the AC Boardwalk many times and didn't realize that Houdini had jumped off the pier. In fact, I vividly recall the eyesore that the Million Dollar Pier had become. But today it has been taken over by Cesaers and converted into an upscale shopping site called "The Pier Shops at Cesaers".