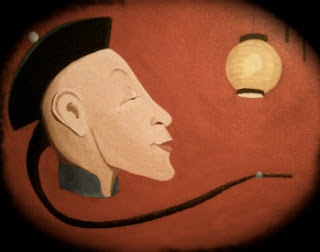 Here is another of my profile pieces. This time it's Chung Ling Soo, the fake Chinese Conjuror. I say fake because his real name was William Ellsworth Robinson and he was an American. He worked as assistant and stage manager for Alexander Herrmann and Harry Kellar. He was probably one of the most knowledgeable people on magic during his time but he had trouble connecting with an audience as himself. Upon seeing the real Chinese magician Ching Ling Foo, Robinson decided he too could do an act that way. True to his word he created Chung Ling Soo, and even gave interviews through an interpreter. At one point there was a very big public challenge going on between Soo and Foo which was going to lead to a showdown. But Foo, the real Chinese magician failed to show and Soo became winner by default.

One of his signature tricks was the Bullet Catch. It was this trick that did him in as he was shot on stage during a performance and died a short time later. If you'd like to learn more about Robinson/Soo, I'd suggest the wonderful book by Jim Steinmeyer called 'Glorious Deception'. It is available through Amazon and is a fascinating read.
Posted by Carnegie