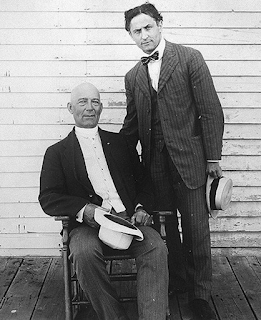 Most people kind of fade out of the limelight when they retire. But this was not the case for Harry Kellar. Sure, he didn't spend all of his time on the road going from theatre to theatre but he still traveled a fair amount. He also visited his old friends quite a bit. And he kept up with magic.

Kellar retired in 1908 when he handed his Mantle of Magic over to Howard Thurston. But Thurston got a lot more than the Mantle. He also received Kellar's Manager, Keller's Touring Routes, Kellar's two chief assistants Frizt and Carl Bucha, as well as all the props and paraphernalia that went with the Kellar show. And to the surprise of many, Thurston only kept two of Kellar's illusions, the rest he sold.

The first thing he did after he retired was take a very long vacation in Atlantic City. Above is a photo of Kellar and Houdini in Atlantic City. According to the Ken Silverman bio on Houdini, this is where their friendship really began to take off. Over time they developed a father/son type of relationship and it's proven in the various letters they shared back and forth.

I mentioned on the podcast about a photo I had of an improved Kellar prop. His name was cast into the iron, and below is a photo of that prop. I'm only showing the part that has Kellar's name due to secrecy issues. The piece is now owned by David Haversat.

Here is a video of Kellar and Houdini. I'm not sure of the location, but I did learn that Houdini had some film footage taken of Kellar and himself while he was in Los Angeles, so that is possibly where this was taken.

One quick minor correction to the podcast also has to do with Kellar giving Psycho to Houdini in 1919. He didn't ship it to Houdini but rather gave it to him while Houdini was in California making movies.

Finally, I wanted to give you the link to an article I wrote a few years back called 'Kellar's Last Mystery'.


I used the book, Kellar's Wonders by Mike Caveney and Bill Miesel, The Sphinx Magazine, Ken Silverman's Bio on Houdini, AskAlexander.org and several other sources during my research for the entire three part series on Harry Kellar. I also used Geneologybank.com, Newspapers.com to research newspaper articles on Harry Kellar.
Posted by Carnegie