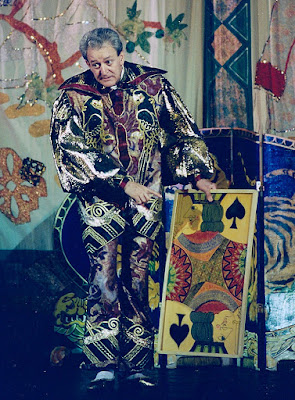 It seems like only yesterday when my friend Cesareo Pelaez left this world. But it's now 6 years ago. He died March 24th, 2012. Cesareo was the creator of the Le Grand David Magic Show in Beverly, MA. In the last 1970s he gathered a group of students and friends to purchase the Cabot Street Cinema Theatre with the idea of putting on a magic show. But not any kind of magic show. He wanted an old world, Vaudeville style magic show, the kind he had seen as a boy growing up in Cuba.

He did it! Feb 20, 1977, the first show was presented at the Cabot. Officially titled, Marco the Magic presents, Le Grand David and his own Spectatular Magic Company! Cesareo was Marco. He invisioned himself as the mentor to the actual star of the show, David Bull, or Le Grand David. I suppose it depends upon who you talk to, some people thought Cesareo was the star, others David, and still others felt there was no clear star, but rather, the SHOW itself was the star, and the players were there to support the group effort.

After 35 years on stage and thousands of performances, the company closed up shortly after Cesareo passed away. They had received every major award possible in magic. They had done what many thought was impossible and they did something that will probably never been seen again.

Now, 6 years later, all the props, costumes, set pieces, curtains, everything has been sold off. The two theatres, the Cabot St. Theatre and he Larcom, have both been sold. To the best of my knowledge, the various cast members are all enjoying retirement, with the exception of Rick Heath, he is far from retired. Rick is still painting, still making magicians look good with his creative prop decor and/or beautiful poster designs.

I think it's safe to say, we all miss you Cesareo! RIP
Posted by Carnegie