The Day That Changed The World of Magic 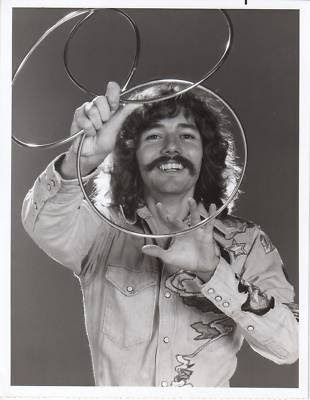 I'd say there were many dates that fit this title, but in the later 20th Century that date must surely be December 26, 1975. This was when Doug Henning's first NBC Special appeared on TV. It was also the night that many new magicians were born, due to Doug's inspiration.

To set the stage, magic was not a prime time event in the 1970s. It's luster had long ago run out. Magic had not totally vanished from television, it was being kept alive by Mark Wilson's wonderful TV shows. But those were not on prime time TV.

Doug Henning had made a big splash on Broadway with his show The Magic Show. It had taken everyone by surprise, and the true magic within the show was Doug. As was stated in the fine book by John Harrison, Spellbound, "Doug couldn't act, couldn't dance and couldn't sing", and yet here he was a bonifide Broadway Star.

It was producer David Suskind's idea to bring Doug to the masses via a network TV special. The first special had a number of unique qualities to it. First, the show would be presented LIVE. Second, Doug would be closing the show with a dangerous escape, the recreation of Harry Houdini's Water Torture Cell. It also had something unique that must have endeared Doug to magician's all over the country, and that was that he opened the show with the world's smallest trick, The Vanishing Nickle. 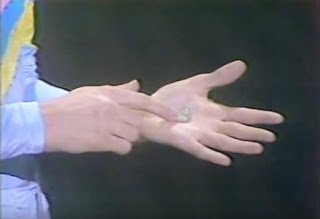 I still recall seeing this mystery for the first time. There was this odd looking guy, with long hair and a t-shirt, very un-magician looking to me. He began with a nickle on the palm of his hand and closed his fingers around it. Then he turned his wrist to show the back of his hand and then back over to show the closed fingers. When he opened his had the nickle was GONE! He turned his hand around to show the nickle was not on the back of his had and then he closed his fingers again. The next time he opened his had the nickle had returned.  This was all done with the camera very close up. Next he picked up the nickle and tossed it twice into the other hand where it changed to a larger coin, probably a half dollar. Then that half dollar changed into a jumbo coin. The audience burst into applause! That was the start of the new age of magic.

Much of the magic on that special had been unseen for years, but after that night many routines would be staples of Doug's future performances, such as The Metamorphosis, Things That Go Bump In the Night, and The Sands of Egypt. 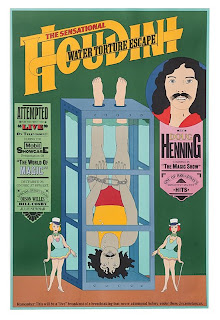 The big number of course was the Water Torture Cell, which was going to be done a little differently than Houdini's version. The first change was the cell itself. Doug's Cell had glass on every side. It was also elevated off the stage. In the Houdini version, Houdini made his escape while under cover of a curtain, Doug did the same, but rather than escape, Doug apparently vanished. At the moment when the tension was the highest, as if Doug had failed and maybe was drowning on National TV, a hooded figure with an axe ran in to break the glass. As the curtain was pulled away everyone saw that Doug had vanished from the tank........and then the hooded figure pulled back his hood to reveal he was Doug Henning! A remarkable conclusion to an incredible special.

It turned out to be one of the highest rated magic specials in Television history and made Doug a star over night! And as I mentioned earlier, that night gave birth to many new magicians as well.
Posted by Carnegie