1953 Houdini and A Pair of Houdini Handcuffs

My fascination with handcuffs began with the scene depicted above from the 1953 movie HOUDINI with Tony Curtis and Janet Leigh. In the scene, Harry brings home a pair of cuffs, according to him "they're good ones". And Bess puts them on Harry. She covers his hands with a towel and bing-bang- boom, he is FREE!!!! It's actually a rather stunning performance, because he is out almost instantly, no struggle, no contorting, he is just out. The cuffs in question are called Hamburg 8s and they are an unusual make of cuff.

As you can see by the image to the right, when closed they form a figure 8. They hold the hands quite 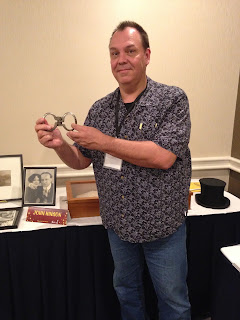 securely and don't allow for much movement, unlike ratchet cuffs that have a chain in the middle. By the way, these Hamburg 8s that I'm holding belonged to Harry Houdini. They are now in the possession of his great nephew, John Hinson. And John brought them to the 2016 Yankee Gathering just so I could see them! I was awestruck to say the least. They were very small, but the more I thought about it, I have a pair about that size that I got from Ian McColl a long while ago. My wrists are fairly large so a lot of cuffs seem small to me.

John let me examine them and even 'try' them on. I say 'try' them on, because he didn't bring the key and they were far too small to fit my wrists. I must admit, I had just the tiniest bit of temptation to force them shut on my wrists to see if I could get out. I think I could have gotten them closed, with a fair degree of pain in the process! Common sense quickly stepped in and kicked the temptation to the curb. For the record, I have gotten out of Hamburg 8s before. But I would never put a pair of Houdini cuffs on EVEN if they did fit. These mechanisms inside are 100 years old and the cuffs are worth a LOT of money. If something were to happen and the lock sudden failed or broke, well it would be a disaster for all parties. So I would never lock a pair of Houdini cuffs on me or anyone.

For a long time I was under the impression that Houdini never really encountered a pair of Hamburg 8s because they came out after he passed away. Though I don't have a definite date of manufacture (some say they were patented in the 1930s), I have seen photographic proof of that style cuff existing during Houdini's time, just not on Houdini.  Plus some folks over at the Forum at Handcuffs.org have had a lengthy discussion over it and again, it does seem to  point to  the cuff existing in Houdini's time.  I totally believe that the cuffs John Hinson had did belong to Houdini. Interestingly, there are several versions of the cuff, one with a side key hole, some with flat keys, curved keys, even circular keys. But all lock the same way. I've included a very short video below of John and I putting on the cuffs. (IF the video shows up, I've been having issues getting it loaded) 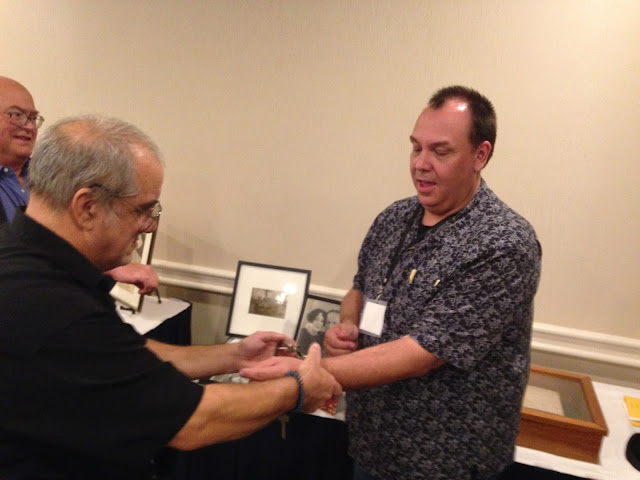