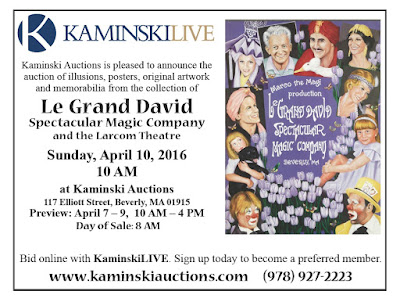 I just received word from Rick Heath that the folks at Le Grand David along with the Kaminski Auctions will be holding a second auction of rare and collectible items from the longest running magic show in history.

If you followed the previous auction you might be wondering, 'what's left?'. Well, for the keen observer, there were a number of things that did not sell. And there were a number of things that were not part of the previous auction. I also imagine, there were items that were discovered since that last auction took place. So you'll have another chance to pick up something if you are a LGD collector.

The auction is April 10th starting at 10am. You can bid in person or online. There will be several days of previews where you can go and actually view the items. You can read a bit about the previous auction here: http://www.themagicdetective.com/2014/02/legrand-david-auction-is-now-history.html

There will be a catalog of the items online soon. They are currently photographing everything. As soon as that become available, I'll let you know.