Forget the Movie for a Moment, The History Channel Stumbled On Something Bigger! 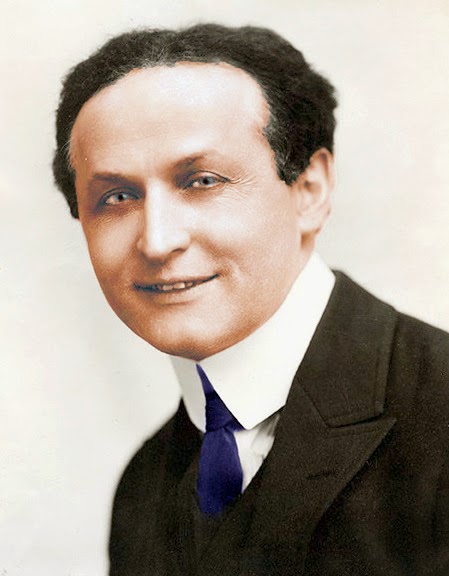 I still am shocked this slipped by me. But now that it's over and I've had a chance to look at the 'home
marketing' efforts used by the History Channel, I realize that they stumbled upon a stroke of genius.
Let me explain. The History Channel had some sort of contest which culminated in a Viewing Party for the new HOUDINI Miniseries. Those who participated received a packet of pretty cool stuff,  in the words of John Cox, "The party pack included a DVD of Night One, a poster, coasters, a Houdini cocktail shaker, a red carpet, and other nifty Houdini tie-in swag."

So basically, they had a HOUDINI PARTY and the highlight was the movie. Great Idea. My question is, WHY DIDN'T WE THINK OF THAT????? Here magicians have been doing a few scattered Seances once a year for the past 50+ years. Why don't we have a HOUDINI PARTY and really do it up?!!!

I propose that we (the magic community) start having Houdini Parties either the week of Halloween or the week after. The reason I say the week after is due to the fact that a lot of magicians may be doing gigs during the week of Halloween. I'm going to blatantly steal ideas from this Houdini House Party event, because they are so good. Party Favors should include big handlebar mustaches, handcuffs, or similar restraint devices, bowlers and top hats. If you really wanted to do it up right, everyone should come in period costume. Cosplay, which is an abbreviation for Costume Play, is HUGE right now and the Victorian Era, thanks to Steampunk, is equally huge. There are places you can go to find the perfect costumes. And hey, why not come as your favorite period magicians, like Kellar, Herrmann, Blackstone, Malini, Hardeen, Houdini and others. How cool would that be? If nothing else, the guys should have some sort of period hat, and the ladies can wear period hats or bowlers and top hats too! It would be up to those organizing it.

The highlight of the night doesn't have to be a movie, though it could be. Or it could be a show put on by some of the magicians. And I wouldn't make this a magicians only event. Wives, Girlfriends, Family, Neighbors should all participate. Spread the 'Magic Good Will' or the 'Houdini Good Will'!

I'll tell you something I did years ago with the local SAM Assembly. We had a Handcuff Escape Contest. I supplied the cuffs, many different varieties and I put out a bowl of assorted keys. The first one to find the right key and escape won a prize. It was a big hit. Something else you could do is take a page out of the Tony Curtis Movie and have a Straitjacket Escape Contest with a prize going to the first one to get free!!!! (be careful with this one that no one falls over and gets hurt....watch the movie again to get an idea of what can potentially happen)

I really think this is a better way to keep the spirit of Houdini alive, better than a Seance. Let's face reality, Houdini ain't coming back. He had his chance and he's obviously either doesn't want too or he's all tied up. :)  So why not have fun, celebrate, share some magic and then watch a Houdini movie or put on a show.

What do you think? I would really like some comments on this one!

I think I'm going to put together a downloadable brochure on this with ideas and tips and sites you can go visit to find costumes, hats, and other fun stuff. Please send me your ideas, but I'm also going to proceed with this right now and add suggestions along the way.


By the way,  to see all the various articles on the 30 Days of Houdini, go here, http://www.themagicdetective.com/search/label/30%20days