I couldn't resist. John Cox over at the fantastic Houdini blog, WildaboutHoudini.com just put up a piece called "Cruising with Houdeni" and it shows an old custom plate from a car he used to have. Well, here is MY current plate. You'll notice it says "HOUDIN" not Houdini. The wonderful state of Virginia wouldn't give me the 'I', even though other plates have more than six letters. I have to laugh though because 95% of the people who notice it think it says HOUDINI. But I figure I'm just driving around with the plates for the Father of Modern Magic, Robert-Houdin!

The car is a Honda Element. I got it to replace my Van which was costing me so much in gas I wasn't making any money anymore. So the Element did great on gas....until the price went to $4.00, and now I'm almost back to where I was. Plus, I miss my van! Such is life. Oh, and John has the cooler car by far! 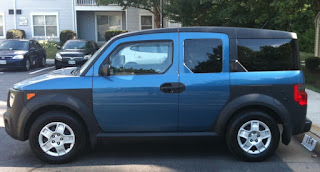