The Hat of Robert Heller 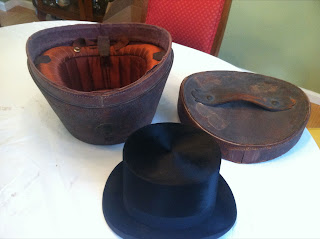 A short time ago I had been contacted by an auction house who had acquired a top hat said to belong to a once famous magician. They contacted me because of my many articles about this magician on my blog. The hat belonged to Robert Heller.

It had remained in his family all these many years, but for whatever reason the family felt it was time for the hat to have a new home. I will tell you, the hat sold for more than I expected, but having said that in my honest opinion the hat is priceless. There are precious few artifacts from Heller's life that remain and this item, though not part of his performing act, is still a wonderful piece.

Heller deserves a much more prominent place in the minds of magicians, but today is mostly forgotten. I have tried as best I could to get the word out about him. In fact, I will continue to write stories and articles about Heller in the future.

I don't know who won the hat, but I hope you cherish it for the rare piece of history that it is.

For those who missed my previous articles, please check out this link to the many stories I wrote about William Henry Palmer, known professionally as Robert Heller.
Posted by Carnegie