Please be sure to watch Episode 5 before reading this....and watch AFTER the credits for the bloopers. 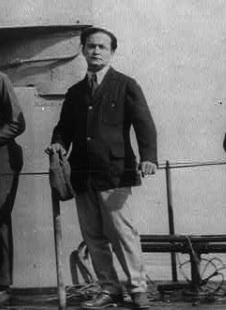 Now that you've watched the episode you'll notice that I screwed up the name of J. Gordon Whitehead numerous times. In fact, the final take even had it wrong, so I had to pull it OFF the video, lol.

Houdini got punched in the abdomen on October 22nd, 1926 by J. Gordon Whitehead, a student at McGill University. He still performed in a show later that day but complained of stomach pain before and afterwards. His final day in Montreal, Max Malini and Ozzie Malini were in the audience and according to Patrick Culliton Houdini told them, "I let a college kid punch me in the stomach and he caught me wrong, and it's killing me."

When it was all over in Montreal they packed up and headed via Train to Detroit. Houdini had a temperature of 102 and at this point should have gone straight to the hospital. But he was stubborn and when he found out the house was sold out for the evening, he turned down all requests and pleas to go to the hospital. That moment was probably his last chance because he pushed himself past all physical means in order to finish the show and collapsed when the show was over.

He was still alive, but his temperature was now 104 and the damage was done. The doctors had little hope that anything they did would help. They still operated and removed his ruptured appendix, but it was too late and the medical staff did not think he would last long. However, Houdini, ever the fighter, continued to battle this and lived on for several days.

A few things I had not mentioned previously, this 1926-27 Tour had Houdini presenting his 3 in 1 Show. Where he did magic, escapes and then exposed spirit mediums to conclude the show. He presented small apparatus magic like Robert-Houdin's Crystal Casket, silk productions, vanishing and appearing lamps and much more. During the escape portion he presented his signature Metamorphosis and the Water Torture Cell....but a broken ankle in Albany NY prevented him from every presenting the WTC again. The finale was exposing fake spirit mediums. This could be quite a lively affair as sometimes he would get hecklers from the audience over this portion and other times when there were no distractions this portion proved to be both fun and educational. It was a massive undertaking and required more than just Harry and Bess to perform.

But it ended in Detroit. I would encourage you to read one other blog article I wrote called "Tracking the Body of Houdini" which follows his body from the hospital all the way back to his burial in NY.

By the way, if you didn't recognize the two people in the photo at the beginning of Ep 5, it was Houdini on the left and ELVIS on the Right....and now you hopefully get the joke :)
Posted by Carnegie