LGD- Creating the Proper Atmosphere Before the Show Begins 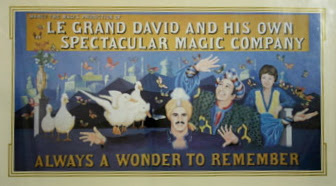 The moment you walk into the theatre on show day, the show has actually begun. Not the stage show, but the overall LGD experience. The ticket taker is in costume in a painted booth which raises him off the ground. Immediately to the right of the ticket taker is a giant dragons mouth which is wide open and you've got to walk through it to get into the lobby. Once you pass through the dragons mouth you'll encounter clowns, costumed characters, jugglers and maybe even Leslie Bartlett and his playful hand puppet dog. What you might not realize while your eyes are taking in the sights, is that there is beautiful music playing and it's not a recording and it's not a player piano.

The music is being played by Avrom Surath, who is also one of the clowns. Avrom and his wife Ann have been with the company since the beginning. One of Avrom's many talents is as a classical pianist and the music that comes out of his fingers is heavenly.  If memory serves there is a piano in the lobby and also another, which might be an organ, in the theatre itself. At the beginning Avrom is playing in the lobby, during intermission Avrom is playing in the theatre. And during the show, you can find Avrom performing on the stage along side Cesareo and David and the rest of the cast. His clown name is Lil Av. You'll know Lil Av in the show because he does some hat juggling bits and is also featured in the Multiplying Bottle routine with David. In addition to this Lil Av plays the accordion (see photo left) while David presents a sleight of hand routine using sparkling balls.

Leslie Bartlett, who I mentioned earlier, has also been with the show since the beginning. He is the father of SETH, who at one time was one of the three main characters in the show, when Seth was just a child. Leslie serves a very important purpose. Along with helping to create the fun, playful atmosphere before the show, he also begins to draw peoples attention towards the front of the stage with his incredible juggling feats. He is the last performer of what I would call the 'preshow' performers that you'll see. Once he is done, the entire audience is looking forward and the stage show is starting.

All the members of the company who are visible, are in some sort of costume. From the folks selling popcorn and refreshments to the cast members selling programs or helping people find seats, everyone is wearing some sort of costume that was hand made by other members of the company. I'm not sure how many cast members are strictly behind the scenes, my guess is not many. They all contribute to the overall production and though you might see them serving popcorn at the start of the show, later they've got an important role to play IN the show.

To me one of the most impressive things happens the day before, when they conduct rehearsals of the various parts of the show. There is a juggling session, barbershop song rehearsal, dance rehearsal and much more. Then on the day OF the show, all the cast members arrive early to prepare the theatre. They all contribute to making sure the theatre is clean and ready by showtime. It's at this time when you realize that this  is much more than just a show it is a labor of love.

Next Article
http://deancarnegie.blogspot.com/2012/04/lgd-original-visit.html
Posted by Carnegie