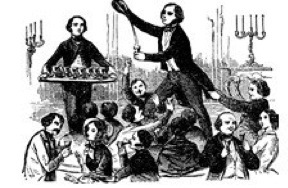 The Inexhaustible Bottle-A magic effect wherein a bottle is filled with water to wash it out and then emptied. Once cleaned out, dry ribbons of different colors would come out of the apparently empty bottle. But upon command of the magi, several different drinks pour forth from the bottle in a seemingly never ending succession. Some versions of the trick have the performer breaking the bottle open at the end and producing a ring, scarf and/or even a guinea pig.

I suppose it was inevitable that I would come face to face with the trick known as the Inexhaustible Bottle. In my youth, I worked with my younger brother on a version of this using a tea kettle. But back then, I hardly knew anything about the trick and really did not do the famous routine justice.
Over the years there have been many variations of the Inexhaustible Bottle. Of course, there is the version with bottle, and then there was also a punch bowl, a tea kettle, a milk carton and I’m sure there are variations I have yet to discover.

Robert-Houdin presented this trick for the first time on December 1, 1847 and claimed it as his own creation. It was said that Robert-Houdin produced 100 glasses of wine/port and other drinks from his bottle. Robert Heller and John Henry Anderson first brought the trick to America and made it popular. Harry Kellar, Compars Herrmann and Alexander Herrmann also presented the trick using a bottle.

In the book, The Secrets of My Magic, David Devant explains that it was his wife who came up with  the idea of using a common Tea Kettle rather than a bottle. Devant's routine was called 'The Obliging Tea Kettle'.  Charles Hoffmann or Think A Drink Hoffmann as he was known, used a cocktail shaker and built a career out of this one trick. Today, Steve Cohen presents his version using a Tea Kettle in his show Chamber Magic.  I’ve not seen Steve perform his full routine, though I have seen clips on video. I have no doubt his work is brilliant.

Although, Robert-Houdin claimed to have invented it, Houdini in his controversial book The Unmasking of Robert-Houdin actually proves that this was not the case. Ludwig Dobler, Phillippe, Henri Robin, and others all presented the Inexhaustible Bottle years before Houdin. It had been presented under a number of different names including: The Infernal Bottle, The Traveling Bottle, the Interminable Bottle, and the Bottle of Sobriety and Inebriety. But the trick is even older than the 1800s.

Houdini reveals that the trick can be traced back to the book Hocus Pocus Jr. in 1635. During this time period the trick used a barrel or wooden cask rather than a bottle but worked on a very similar principle.

The inspiration for the trick possibly comes from two biblical stories. These two stories are when Jesus was at a wedding and turned Water to Wine, the other is the story of the loaves and the fishes certainly an ‘inexhaustible’ miracle.

I added a version of the Magic Tea Kettle to my summer show in 2011. My version was based on an idea by Jim Steinmeyer but I came up with a decidedly different climax to the trick. In all the Tea Kettle versions there is no real climax other than pouring more and more unique drinks. The ending I came up with gave the trick a definite 'ta-da' ending, but it proved to be more shocking than I expected. I actually had to rewrite the set-up for the ending in order to not freak people out.

What was my ending to the Inexhaustible Tea Kettle you ask? After pouring numerous drinks like milk, cool aid, tea and so forth I announced I would attempt Orange Juice, but I apologized in advance in case it didn't work because, as I explained, Orange Juice was the hardest drink of all. Then I told the audience for some odd reason the oranges would separate from the liquid in the strangest way. At this moment, I would pour the remaining liquid and the oranges slices could be seen separated in the water  for a brief moment....then suddenly the audience realized the orange slices were actually GOLDFISH!

Tremendous ending, I thought. First time I tried it, two of the people who took drinks of the other liquids almost puked thinking they just drank 'fish water'. It was terribly funny and somewhat embarrassing and thus required a rewrite in order to have the ending make sense and for the audience members not to get ill thinking they drank dirty fish water. The 'corrected' script solved the problem and it made for a tremendous effect in my show. As enjoyable as my twist on the trick was, I still long to one day present an actual Inexhaustible Bottle effect...if I can ever locate one.

Now if you'd like to see a novel presentation of the 'Think-A-Drink' act presented by Charles Hoffman, please watch the video below.

*portions of this blog were reprinted from my old magic blog dated Feb 9,2010.
Posted by Carnegie