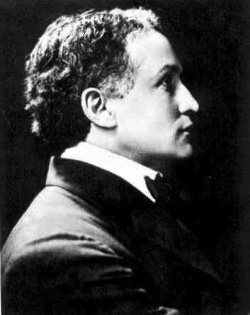 This is fascinating to me, it's an article that was written by Houdini, yet didn't appear in the papers until November 7th, 1926, a week after he died. The article is titled "Houdini Gave Advice to Modern Youth Battling for Success". The words he wrote are as applicable today as they were then.


"It's true, most unfortunately, that experience is a hard school, but we must learn it, and no other. The light of another's experience will not illuminate the path of youth very much. It is only after he has had his own hard knocks that he can profit by them."

"Starting out thirty years ago as a magician, I have passed hundreds who did not know that success was just another name for hard work. Those in the arrogance of their youth rarely listen to their elders; nevertheless I say that inspiration plays little part in success, and chance plays less. What little success I may have had has come from making up my mind in early youth to be the best in my line no matter what it cost in hard work, and never deviate from that course."

He then goes on to explain how success isn't achieved overnight. He shares the story of how he fearlessly jumps from high bridges and that he had to work up to that by overcoming the height challenges in stages. First learning to jump from one level and then going higher and gradually higher. It's a good analogy of how success is achieved through smaller steps but often to the outside observer who isn't aware of all that work, they think you just made those triumphs appear from thin air.

The final paragraph is interesting because on one hand it appears that he is pushing his anti-spiritualist agenda, but I think he is really expressing a thought with a double meaning. Sure, Houdini is pushing his fight against the Spiritualists, but by ending with this piece he is also expressing his view that success doesn't come about through 'magic or supernatural means' but by good ole hard work.


"No one possesses supernatural power... Do not therefore, be superstitious. Don't be afraid of spirits or spooks. There are none... Don't fear the dark. I have slept in haunted houses and cemeteries and the only thing I ever caught, was a cold."

I wish Houdini had lived longer so he could continue his columns of advice, but instead these were truly his final words. 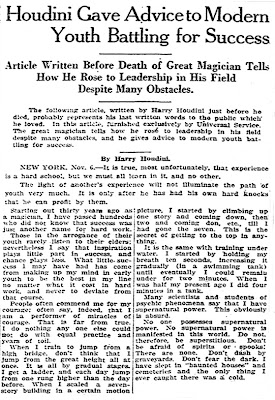