A Female Houdini In the Movies


Houdini wants to know how it was done. And by the way, Mr. Houdini, the handcuff king, was at the Hippodrome in Cleveland a week ago and mystified all the folks who saw his performance.

Helen Holmes, a movie picture actress with the Kalem Company, who is appearing in the film, "Hazards of Helen", has duplicated Houdini's stunts.
Recently, she was thrown into the rough and choppy waters of San Pedro harbor, California, with her hands and feed tied. She escaped and met her sweetheart on the bank of the big stream just as the scenario said she must.
Miss Holmes has worked for more than a year on the trickery of escaping bonds. She has shown most of these in her moving pictures, which are the most daring of the kind ever exhibited. 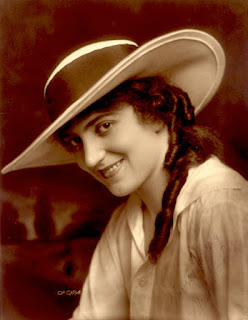 So who was Helen Holmes? Well she was a silent movie actress from the Illinois born in 1893. She began making movies around 1912. As the Perils of Pauline serial began to take off, the Kalem film company decided to do a similar serial of their own starring Helen Holmes. Her films were somewhat different than the cliffhangers of the Perils of Pauline. Many of her films had Helen herself escaping her bonds or freeing herself rather than being rescued by someone else.

Given the time period in history, I kind of wonder if she did in fact do the escapes. She was known to perform her own stunts, so it's possible.

Helen did not perform the escapes outside of the movies, and any work she may have had in legitimate live theatre was as an actress and not as an escape artist. Her movie career ended in the mid 1920s but she remained in show business both working in theater and training animals for movies. She died in 1950

Below is a video of a typical Damsel in Distress shot from a movie. This is Helen Holmes in action. It appears she was doing these harrowing escapes in the movies before Houdini made his first film.