Meeting The Magi - The Cast 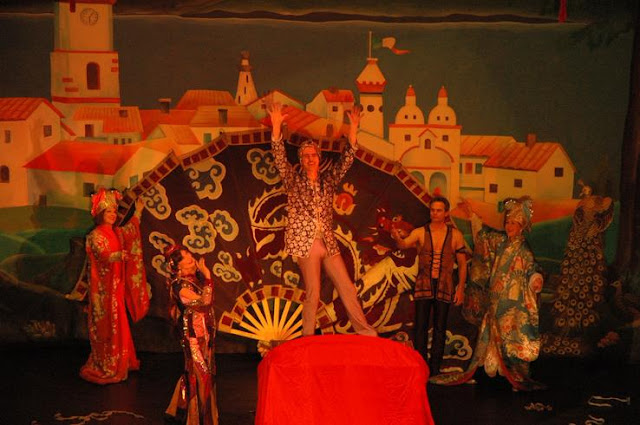 Before I discuss the time I spent with Cesareo Peleaz I would like to mention the cast and crew of the Le Grand David performance. Last time I named everyone, and I believe I left off Ellen, Marian and Martha.  Marian and Martha are two young girls, daughters of one of the cast members, who appear throughout the show. Cesareo believes it is important to include children and starts them off at a young age.

Throughout the morning different cast members came up and introduced themselves to me.  Usually they would spend a few minutes talking and asking me questions. They all seemed to be genuinely interested in me.  They also seemed to know who I was and wanted to be sure that I had everything I needed and was enjoying myself. Their friendliness went beyond common courtesy. They were treating me as one of the LeGrand David Family.
Later in the day, when there was more time to reflect on it, I realized what was happening.  Here was a group of individuals, 95% volunteers, all working towards a common goal. There was a unifying quality about everyone that was refreshing. There were no egos in the group.  Let's face it, what magician and or performer for that matter doesn't have an ego?  Well I can name quite a few, and they all perform at the Cabot Street Cinema Theatre.
Each cast member works together to make sure that all of the jobs and tasks are completed.  They have a sense of pride in their work, yet they are not proud. In fact, they are rather humble.  I remember asking Avrom Surath, who plays a character called Lil Av' in the show, "How many people do you usually have in the audience during a performance?"  His reply was "Well, we are happy to perform for whoever shows up."  He didn't say that because it's hard to pack the people in.  The place does incredible business.  He said that because their focus is on pleasing and giving the audience the best show they can, whether there are two people or five hundred.
Let me point out, this show is primarily a volunteer effort. Not only do they put on the show, but they also design and sew their own costumes, paint their own scenery, build their own illusions, and do all of their own promotion. And to add to the equation, when they began, most of the cast didn't have performing backgrounds. They have learned as the years have gone by with Cesareo as mentor and teacher.  The LeGrand David show has been playing for 24 years and with most of the original cast.  They are a testament to what can be accomplished when egos are put aside and everyone works together to create MAGIC.
more to come... http://deancarnegie.blogspot.com/2011/05/meeting-magi-cesareo.html