Over the next few days I'm going to share with you an event that happened to me. It was 11 years ago now, so in effect it's part of my magic history. It was life changing in many ways. I wrote about it in a magic newsletter but I don't think I've shared it with anyone since that time. I'm not going to edit what I wrote, so keep in mind this was eleven years ago. I hope you enjoy this look back... 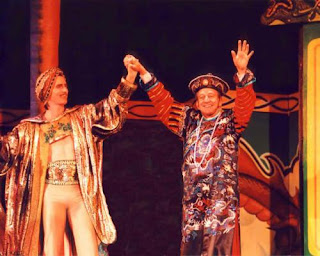 How many years have you been involved in magic? Whether you are a beginner new to the art or someone who has many years dedicated to magic you still have your likes, dislikes and opinions.  Over time we get accustomed to certain styles of magic we enjoy over others.  Some may have a better appreciation for close-up magic because that is what they perform.  Others have a preference for stage magic, illusions or whatever.  So it goes for everyone.  Now how many of you with years of magical knowledge behind you would figure on having your magic world reshaped by meeting one person?  Doubtful you say. Personally, I would have hardly expected after 25 years in Magic that I would come across someone who would change my whole concept of magic but I did.

His name is Cesareo Pelaez.  He is a retired professor of Psychology from Salem University. He is also Past President of the Society of American Magicians.  Oh, and he is the founder, producer, creator, mentor, ect. ect. of the LeGrand David Spectacular Magic Company in Beverly Mass..
I had the good fortune of spending a couple days with Cesareo and the cast of the LeGrand David Show in early April (2000).  The journey began with a train ride to Boston.  Having never been on a train before this alone was quite an experience.  My mind quickly thought back to days gone by when magicians would travel via train.  Alexander Herrmann, Harry Kellar, Howard Thurston, Harry Blacktone Sr. and many others used the trains to move their shows from town to town.  Eagerly I took in the sites, wondering whether these were the same tracks that a famous magician of old had traveled.  Before I knew it we were in New York City.  I couldn't help but wonder in which direction was 278 (the nickname of the brownstone that Houdini lived in).  In many ways viewing New York from the seat of this train made it look not unlike any other big city.  But at times I could invision the city as it must have been 80 years or so ago.  Where amongst all these buildings was Martinkas Magic Shop, the birthplace of the Society of American Magicians?  The train ride up thankfully didn't seem very long and I was soon in Beverly fast asleep and anxious for Saturday's activities. 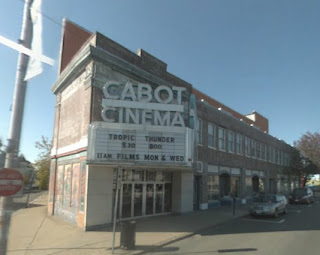 Saturday morning things began to get a bit surreal.  As a teen I had been in Beverly to see this very show.  It is now 20 years later and I am having trouble recognizing streets and so forth.  Even the outside of the Cabot St.Theater seemed different somehow.  As soon as the doors opened I was transported back in time.  Everything seemed different yet in some way it was exactly as I remembered it.  I was surprised at how much I was able to recall.  But before my mind could wander too far members of the cast came up to introduce themselves to me.
I am terrible with names usually.  And to add to the surrealism of the weekend, I was actually able to remember every single person's name that I met.  Here goes, I met Avrom and Ann Surath, Webster Bull, David Bull, Leslie Bartlett, Tom and Pam and their boys Will and Andrew, Rick Heath, Mark and T.J. who are also magicians, Johnny Lapo, Mark and Jeremy.  Notice I left out one name.
The first time I met Cesareo he appeared out of no where.  He spoke only a few brief words and then was gone.  I swear I turned my head and the man had vanished!  Fortunately later in the day I got to spend considerably more time with Cesareo at the Larcom Theater.  He gave me a tour and immediately started his unique brand of 'teaching'.  As we walked around every sentence seemed to contain a lesson.  I believe the saying is "When the student is ready the Teacher will come" and so it was for me.  His words awakened my mind to a whole new approach to magic, in fact a whole new way of seeing everything.  He eventually left me alone to soak in the surroundings while he went to prepare for the show.
I cannot give away any details of the Larcom Stage Show other than to say the title is "An Anthology of Stage Magic".  I turned to my girlfriend at the end of the show to ask her opinion and her face was just beaming.  "OH MY GOD, I could sit through 4 more hours of that!" she said.  That is coming from a layperson's perspective.
I can only add this, as the packed theater emptied at the conclusion of the performance I found myself alone in the theater staring at the stage where moments before a new world of wonder and amazement unfolded in front of my eyes.  I got pretty choked up realizing that I just had the privilege of watching the most beautiful magic show in existence.
To be continued… http://deancarnegie.blogspot.com/2011/05/meeting-magic-cast.html
Posted by Carnegie