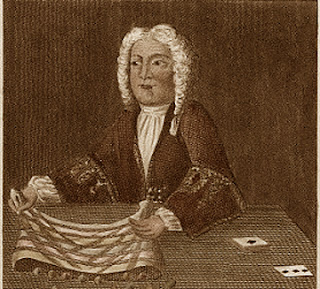 Today I'm going to use words that weren't yet invented when this man lived. The fellow I'm writing about today was a real superstar. He was an entertainment icon. His name was Isaac Fawkes, sometimes spelled Faux, or even Fawks. He was born sometime in the late 1600s and he lived into the 18th Century. In a time before mass media, before any of the technological advances that we cannot live without today, this man made a huge name for himself.

Isaac Fawkes was a conjurer of the highest order. His show was so well known and so well respected that other people in the 18th century entertainment world looked up to the Fawkes Show as the standard by which all other performers and acts were compared.

Fawkes presented his show at fairs, in theatres and in taverns. He was a popular and regular attraction at the Bartholomew Fair in England. The Bartholomew Fair was held every year from 1133 to the year 1855. It was held each year on August 24th - 26th, though in the 1600s the Fair ran for two weeks.

The location of the Bartholomew Fair was in West Smithfield, England. It was a field or open area right outside of London at the time. Today, this same location is filled with buildings, however the St. Bartholomew The Great Parish still stands and portions of the fair were held right in that area.

The Bartholomew Fair was a huge economic event for Londoners. The richest of the rich and poorest of the poor could be found attending the fair. From at least 1720 to 1731 Isaac Fawkes set up a booth at the Bartholomew Fair each year. It's possible he performed there prior to 1720, but there is no historical record that has been found. There are a number of drawings, paintings and engravings that depict the activities of the fair and in all the artwork the Fawkes booth is depicted. He apparently hung a very large hand painted banner outside of his booth to attract people. The banner showed an image of Fawkes performing his conjuring feats, similar in style to the image at the top of the blog.

As an additional historical note, William Wallace, the Scottish knight who fought for Scottish Independence against King Edward 1 of England was tortured  and then killed in West Smithfield the day before the Fair opened in 1305. And one more historical tidbit for you, Benjamin Franklin worked in Smithfield as a journeyman printer in the 1700s, so he no doubt attended the Bartholomew Fair. 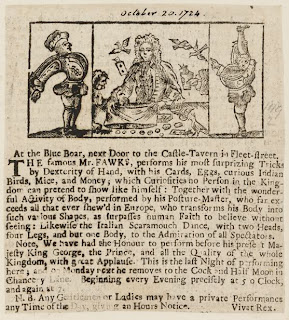 MAGIC
Looking at the photo at the top of the page and to the right you might be able to tell a few of the things that Isaac Fawkes used in his performances. It would appear his central conjuring feat was that of the Egg Bag. Not the Egg Bag of today, the small Albini or Malini bag, but instead a much larger bag approximately 20 inches wide by maybe 8 or ten inches tall. This bag would be turned inside and out to show that it was empty. Then, according to accounts, 100 eggs would be produced from the previously empty bag. I'm guessing the 100 count was probably stretching the truth slightly. But I wouldn't be surprised if 20, 30 or even 40 eggs came from the bag. He also produced 'showers of gold and silver coins' from the bag. At the conclusion of the routine a chicken was produced from within the bag. Mike Caveney does a wonderful recreation of this effect which appears on video.  The video footage is on the last DVD of the EMC 2010 Magic Conference DVDs. Mike is recreating a routine by a vaudeville performer, but watching the performance gives a good idea of what Isaac Fawkes routine must have been like.

There is a Fawkes handbill where he is listed as 'slight of hand man' or sleight of hand man as it were. His fair banners have him listed as "Faux - Dexterity of Hand'. He clearly was an adept sleight of hand artist and manipulator, plus given the period in time, he probably wanted to distance himself from any connection to 'witchcraft or dark arts'. Being a 'slight of hand man' put him in the league with jugglers, which is a name associated with early conjurers. He presented magic with dice, coins, cards, India Birds, and even mice. With cards Fawkes presented color changes, had the pips move from place to place and tossed the cards into the air where they changed into birds.

In addition to his magic, he also had at least one, sometimes two 'Posture Masters'. These were contortionists and a very popular part of his program. His other feature was an automaton, a musical clock from which could be heard organ music, flute playing and birds singing. He purchased this from clockmaker Christopher Pinchbeck. Automatons of various designs would continue to be popular pieces in the acts of conjurers well into the Victorian Age. The most popular artist to feature automatons was probably Robert Houdin of France.

Fawkes often bragged about retiring from performing because he had made enough money to live a rich and happy life. But he never retired. He even challenged his rivals to deposit in their banks the same amount of money that HE had!

Isaac Fawkes died on May 25, 1731. He was buried at St. Martins-In-The-Fields Church in Westminster. The church building has been replaced since the time of Fawkes and all remnants of a churchyard are gone.  He apparently left an estate of 10,000 pounds to his wife Alice Fawkes though some historians argue over the accuracy of this amount. It was known that his performing career made him wealthy, but 10,000 pounds is an unusually large amount for the time.

Believe it or not, Houdini once again has a connection to Fawkes. Houdini was a lover of magic history and had acquired information from the collection of magic historian Henry Evanion prior to his death. It was Houdini who searched out and found that Fawkes first name was Isaac. Houdini's searches also led to the discovery of the burial record at St. Martin's In The Fields Parish.

Sidenote: In the Harry Potter novels the phoenix belonging to Professor Dumbledore is called "Fawkes". Some sites I discovered make the claim that this name refers to the famous Guy Fawkes who planned the failed Gunpowder Plot of 1605. Later, November 5th was designated Guy Fawkes day in commemoration of the failed attempt to kill the king. I can't help but wonder if the true inspiration for using the name "Fawkes" for the phoenix was actually our guy, Isaac Fawkes the conjurer. He certainly ties in better with magic than Guy Fawkes does.
Posted by Carnegie