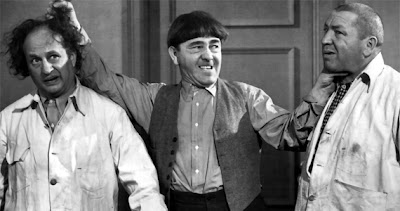 The Three Stooges, comedy icons from the early days of movies. Their popularity continues today though all of the various Stooges are gone. I spent some time recently on Youtube watching videos of interviews with Moe Howard and Larry Fine. The history of their act is fascinating to me. Though I wouldn't say I'm a typical fan of the Stooges. I guess for me, they were intriguing and interesting in the same way a magic act or a manipulator would be, but not really all that funny. That's not meant to be a slam on the Stooges, as some people find them hilarious. I just saw them differently and yet still entertaining.

To this day I don't really know if they were really using large metal wrenches and really pounding each other over the head or if it was a softer comedy prop. Like fine magicians, they fooled me. I do know the eye poke thing they did was real and they would on occasion poke each other in the eye. Moe Howard admitted to this on the Mike Douglas Show and discouraged people from ever doing or trying it.

With the Stooges unique abilities I wondered if there was any connection to the magic world and indeed there was. The first example is rather interesting. Moe Howard married Helen Schonberger, who was a cousin of the late Harry Houdini in 1925. I can't help but wonder if Harry was invited to the wedding.

On a TV talk show, Moe Howard admitted to knowing Fred Keating the magician. Given the fact that Moe and Shemp worked with Ted Healy in Vaudeville, they probably knew a lot of magicians. In 1925, Larry Fine would join the act. Eventually, Shemp would leave and be replaced by Moe's youngest brother Jerome, known as Curly.

Larry Fine has an odd connection to Houdini, though admittedly a bit of a stretch. Larry and his wife lived out of hotels for years. One Hotel he lived in for quite a long period was the Hollywood Knickerbocker Hotel, the site of the Final Houdini Seance.

Curly Howard had a stroke and was replaced by Shemp. Later Shemp was replaced by Joe Besser. Joe Besser has the biggest connection to magic. At age 13 he wanted to become a magician. He eventually went to work for Howard Thurston as one of the assistants. Through a mishap in the show, Besser accidentally messed up a trick but received a great deal of laughs. From that point on Thurston made sure he capitalized on Besser's comedic abilities. Joe Besser left Thurston and for a time went to work with Madam Herrmann.  In the 1960s, Joe Besser worked with Carl Ballantine on the Shirley Temple Theatre TV Show.

The Three Stooges (and the additional Stooge replacements) were comedy geniuses and in that way had a magic all their own.
Posted by Carnegie