Something is terribly wrong in magicland. This concerns the first Dean of Magicians Harry Kellar. Today, March 10th, marks the 89th Anniversary of his passing. He was cremated and his remains are in Angelus-Rosedale Cemetery in Los Angeles CA. All of that is accurate. What follows is the mystery.

As you may or may not know, I collect photos of the graves of magicians who have passed on. I think we should pay homage to those who have done so much for the profession and have now gone into eternity. I had posted the image below from the Angelus-Rosedale Cemetery on one of my blogs in the past. This is the headstone for Harry Kellar's grave. It can be found near the road under a small tree in Section L, directly to the right of the front of the mausoleum. 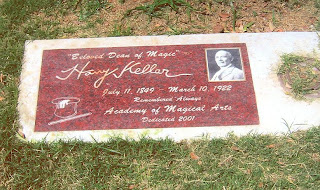 There is only one problem with this. Harry Kellar wasn't buried in the ground. His remains are in the columbarium at Rosedale Cemetery.  They are in niche 76GOC in what is apparently an unmarked niche. According to magic historian John Booth, the outside of the niche 'has a dull brown steel frame door with a central panel of purple-black glass'. John Booth first visited the site in mid 1970s and an attendant showed him the niche and used a key to unlock the door. Inside were two bronze urns one containing the ashes of Harry Kellar the other the ashes of his wife Eva. The description that John Booth gives of the urns is this, "I could see two graceful bronze urns, shaped like flaring vases or ancient oil lamps, with oblong bases. One was crammed in at an angle, the niche being too small for the bases of both to lie flat. Each urn was engraved to mark the ashes it sheltered." He also mentions that inside was a small painted wooden plaque lying inside the niche with the words

"Harry Kellar
Good-bye old friend
Servais LeRoy"
Now the story gets even stranger. In the Kellar's Wonders book by Mike Caveney and Bill Miesel, there is a photo inside (see image left) the niche #76GOC and what you see inside are two heavy bronze chests (boxes) and a wreath made of metal with a metal tag that reads "Harry Kellar Good-bye ,old friend, Servais LeRoy".  There are no bronze urns as John Booth described. John Booth said there was a wooden plaque from Servais LeRoy but now there is a wreath made of metal with a small silver plaque that had the same inscription as the previous wooden plaque. The Kellar book was published in 2003 and there is a photo in the book of Bill Miesel outside the columbarium, so it's likely the photo was taken a year or so before the publication of the book.


John Booth, in his book Creative World of Conjuring, was the first to bring this mystery to light. He too returned to the niche 12 years after his first visit and he found the large chests, though he said they looked like darkened silver. He said they both had a plaque on them, one for Harry Kellar and one for Eva Kellar, but the bronze urns he had seen before, now were gone. He also notes the wreath which was not there during his first visit.

What happened? One thing we know and again it's according to Mr. Booth is that the niche itself appeared to have been tampered with over the years and could be opened now without a key. Sometime between the mid 1970s and 1990 someone replaced the bronze urns with the larger heavier metal chests. They also replaced the wooden plaque with the metal wreath and had a plaque inscribed with the same message.

One website I stumbled upon said that Kellar's grave remained unmarked for 80 years and the Academy of Magical Arts finally got a headstone to mark his grave in 2001. It's true, according to John Booth that there was no name on the niche #76GOC. But if Kellar's remains were moved and buried in the ground, then why does the marker not make mention of Eva Kellar, Harry's wife whose ashes were next to his in the mausoleum?

To throw one more thing into the mix, Booth claimed that a letter was found in the niche during his second visit. This letter was on the stationary of the Rosedale Cemetery Association and was apparently from Kellar's niece. The typed letter said that "The urns containing the ashes of Harry and his wife should remain permanently in the niche". And she requested that they (the association) forbid anyone whatsoever to remove or molest the urns in any way. This was dated May 8, 1922 and was not signed but instead had the name typed at the bottom of the letter. So if the remains were buried in the ground in 2001 it was against her wishes.

Where is Harry Kellar today? Still in Angelus-Rosedale Cemetery. I just found out that the marker that the Academy of Magical Arts had made for Kellar was a marker only, and the actual ashes of Kellar  are still in niche #76 GOC inside the building below right next to his wife's ashes where he wanted to be. One mystery solved. As to how the urns inside the niche changed or were switched, that will be a mystery forever I'm afraid.

I want to thank Mike Caveney, Bill Goodwin, John Cox, and Allan Ellenberger for their help on this blog.
Posted by Carnegie