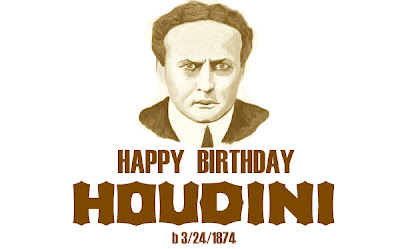 This is the actual birthday of Erich Weiss, known to the world as Harry Houdini. The birthday that he claimed most of his life was on April 6th. So on April 6th we'll be back with more birthday wishes and perhaps a surprise or two. In the meantime, have a piece of cake and celebrate the life of the world's greatest escape artist and one of the greatest entertainers to ever live!

By the way, everyone in the magic world seems to already know about this, but go to Google RIGHT NOW before the day is up and you'll see their part in the Houdini celebration, a Google Houdini logo.
If you missed it, here it is below.