"I knew, as everyone knows, that the easiest way to attract a crowd is to let it be known that at a given time and a given place some one is going to attempt something that in the event of failure will mean sudden death."
HOUDINI
"You can never arrive at the perfection of art until your handling of the illusion produces a thrill of genuine surprise in all who behold it"
HARRY KELLAR
"The end of all magic is to feed with mystery the human mind, which dearly loves mystery. So leave every mystery forever unexplained!"
HARRY KELLAR
"I do tricks nobody can explain."
HOUDINI

"My professional life has been a constant record of disillusion, and many things that seem wonderful to most men are the every-day commonplaces of my business. "
HOUDINI
"As long as the human mind delights in mysteries, so long it will love magic and be entertained by magicians."
HARRY KELLAR
First Encounter
When Houdini started out with his brother Dash, there were two prominent magicians in America, Herrmann the Great and Harry Kellar. In August 1896, after struggling in the tough world of show business and getting no where, Houdini wrote to both of the great magicians looking for work as assistants in their shows. No reply came from Herrmann who would pass away by December of 1896. Kellar did reply but he told Houdini he had no room in his show at that time.

Kellar's Retirement
In May of 1908, Harry Kellar left the stage to retire. Just a few weeks later he would spend sometime with the Houdini's in Atlantic City, even Cecelia Weiss was present during this visit. According to the Ken Silverman Bio this is basically where their friendship starts. For a while Kellar lived in NY with his wife Eva, and Houdini and Kellar saw each other from time to time. But only a year later Kellar purchased a home in Los Angeles and he and his wife moved to the west coast.  Kellar still made trips to the east and whenever he was in NY he would usually attend the magic club meetings and see Houdini. Kellar and Houdini stayed in touch writing letters throughout the rest of their lives.

I found a very interesting note in the Kellar's Wonders book by Mike Caveney and Bill Miesel. In 1916, Houdini and Kellar were at a meeting of the Society of American Magicians. It was at this meeting that the decision was made to start local chapters throughout the country, called 'assemblies'. Houdini and Kellar both stepped up and agreed to spread the word and it's no doubt through their efforts that today the S.A.M. has assemblies all over the U.S. and even other parts of the world.

Another interesting S.A.M. item took place when Houdini was President of the organization. He nominated Harry Kellar to be Dean of Magicians. He was unanimously voted in.


Kellar's Second Retirement
On Nov 11, 1917, Houdini coaxed Kellar into coming out of retirement for one evening. This was so that he could be part of an all star cast at the Hippodrome in NYC. The event was to raise money for the victims and family members of the S.S. Antilles, an American Transport ship that had been torpedoed by a German submarine.

On the evening of the 11th, Houdini acted as host and M.C. for the first half of the show. He even presented his Water Torture Cell. But the real thrill that night came from Harry Kellar who treated the audience to his amazing Floating Table routine and he followed this with his Spirit Cabinet. After his performance Houdini stepped on stage with roses for the Grand Master. Then he brought on a sedan chair and members of the show picked up Kellar sitting in the Sedan Chair and marched him across the stage as the entire audience got up and sang 'Auld Lang Syne'. It was a night to remember and Kellar was to taken with the gesture that it was difficult for him to express himself.

A few days later he wrote a heart felt letter to Houdini in which he said "you gave me the proudest and happiest evening in all my life and a farewell that can never be surpassed." Houdini followed this with a letter to Kellar in which he basically said it was an honor to be able to give back to such a beloved man and magician. 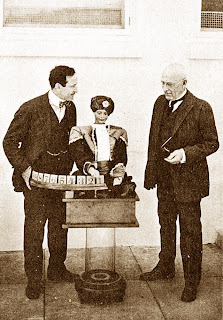 When Harry Kellar sold his show to Howard Thurston, only two things made it into the Thurston show, the Levitation and Kellar's Spirit Cabinet. The other items were sold off and Charles Carter purchased several of them.

One in particular was Kellar's automaton Psycho, which was a knock off of J.N. Maskelyne's automaton of the same name. Psycho had been with Kellar since he purchased it in England in 1878. Kellar referred to him as 'my little companion and friend'. He was also an important part of Harry Kellar's show. He sold it to Howard Thurston in May 1908 and now he was about to come face to face with his old friend.

While Carter was performing in Los Angeles, Kellar convinced Charles Carter to sell Pyscho back to him. Then in May 1919, Harry Houdini received a letter and package from Kellar. It was Psycho and Kellar was giving his old friend to Houdini as a gift.

This was not the only gift Houdini received from his friend Kellar. According to Edward Saint, Houdini had a jeweled Question Mark pin that he received as a gift from Kellar. This pin has been lost to time. Kellar also gave Houdini his Spirit Cabinet that was used in the final Farewell performance of Harry Kellar. I'm curious if the Spirit Cabinet survives today.

FILM
Houdini had started the Film Development Corporation and Kellar became one of the investors. Unfortunately, this was not the high point of their relationship. The FDC struggled to make money and Kellar often spoke to Houdini about getting rid of his shares of stock. Kellar's concern it turns out wasn't about loosing money, but instead about being responsible to creditors for future money. Kellar encouraged Houdini to get out as well. He felt it would be a terrible shame for Houdini to loose all the money he had worked so hard for during his career on a bad business venture.  Houdini's concern was less over money and more over loosing his friendship with Kellar over this deal.

One plus to the movie business was that it put Houdini in California and the studio where he was making movies was only a few miles from Harry Kellar's house. Kellar had suffered a stroke and wasn't as mobile as he had been before. Houdini visited him often and made arrangement for flowers to be sent to his home every week. During at least one visit, Houdini was able to capture Kellar on film thus preserving his image for posterity. Imagine how thrilling it would have been to sit in a room while these two spoke of things mysterious and magical.

DEAR FRIENDS
Kellar thought of Houdini as a son and it was obvious that Kellar was a father figure to Houdini. He was also probably the only living magician that Houdini looked up to. However, though their friendship was filled with mutual admiration they did not agree on everything. For example, Houdini let people know that all his effects were presented by purely natural means, his "My Mind is the Key That Sets Me Free" quote expresses this perfectly. But read what Kellar thought..."Make your work artistic by clothing each illusion with all the glamor and shadows of fairyland, and the suggestions of incantations and supernatural powers in order to prepare the observer's mind for a mystery though there be no mystery." Kellar filled his promotional materials with demons and other supernatural beings. Houdini on the other hand was totally against the suggestion of supernatural powers in his performance.

However it's safe to say that they agreed in most areas. Kellar believed that tricks performed by the masters who came before him would no longer fool even children and it was the modern magicians job to constantly update and improve the effects and the methods. Houdini took older tricks and made them new, like the Needle Trick or repackaged them to fit him, like the Sub Trunk, or created brand new effects, like the Water Torture Cell. They both debunked Spiritualist phenomenon in their shows. Interestingly, Kellar is probably best known for his rope tie. Houdini of course was a master of rope ties and rope escapes.

After Chung Ling Soo died on stage doing the Bullet Catch trick, Houdini made plans to add the dangerous Bullet Catching routine to his show. When this news reached Harry Kellar he sent a fast and firm reply to Houdini.  I believe his words were "Don't do the damned Bullet Catch, we cannot afford to loose Houdini!" or something to that affect. Houdini heeded the advice of his old friend and chose to not present the Bullet Catch, ever! Harry Kellar was probably the only person who could scold Houdini and get away with it. But the letter over the Bullet Catch was sent more out of concern and caring for his friend than as a rebuke.


1922
Harry Kellar passed away on March 10, 1922. He had been suffering from a bad bout of pneumonia and had been coughing up blood. The build up of blood in his lungs killed him. He was 73 years old. Houdini was not able to attend the funeral, so he made arrangements for it to be filmed. He actually did the same thing when his friend The Great Lafayette died, he had that funeral filmed as well. But to my knowledge neither of these films have survived.

Before Kellar died Houdini got his permission to write his biography. Houdini would use his 100s of letters (Houdini claimed thousands) and also his many meetings with Kellar as the foundation for the book. He only got as far as 100 pages. This became one of the projects that Houdini never finished because in 1926, only four years after Kellar, Houdini died. In the book Hiding the Elephant by Jim Steinmeyer he says the manuscript resides in the Mullholland Library, which today is part of the David Copperfield Magic Collection.

Houdini referred to Kellar as  'the greatest magician the world ever saw.'


In a letter to Houdini, Kellar referred to him as 'our greatest showman-Harry Houdini.'
I think that pretty well sums it up. 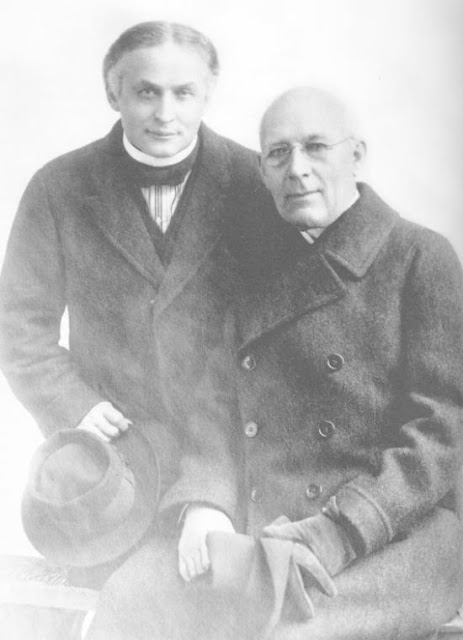