The original article has been moved and updated. New information has been discovered since this article first appeared in 2011. Here is a link to the new article http://www.themagicdetective.com/2017/01/houdini-and-boston-jail-setting-record.html 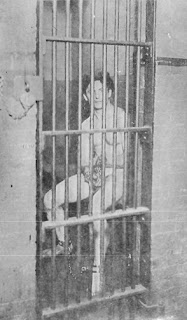 The date was March 19, 1906 and the Superintendent of Police William Pierce had agreed to lock up Houdini in their jail. He was first taken to cell number 77 on the ground floor where Houdini removes his clothes and was checked for keys and picks. Nothing was found and Houdini's clothes are then locked into this cell while he himself is taken to the second floor. He steps into cell number 60 and is secured in handcuffs and leg irons. Then the Superintendent locks Houdini inside Cell #60 and he and the other police officials leave Houdini and head for the main office. They were confident that Houdini could not escape.

Sixteen minutes later Houdini was scaling the outer wall of the jail and running down the road towards Keith's Theatre. Houdini called William Pierce from the theater to let him know he had escaped! Shock set in. Superintendent Pierce asks Houdini to return so that the photographers can get a photo of him going over the wall (see photo at top of page). According to the Kalush Biography, the Superintendent told Houdini he expected him to show up in the jail office if he got out. He shook Houdini's hand and seemed happy with the results. Though Houdini's book "Adventurous Life of a Versatile Artist" paints a different picture. Houdini claims that Pierce's only response was "I have nothing to say".